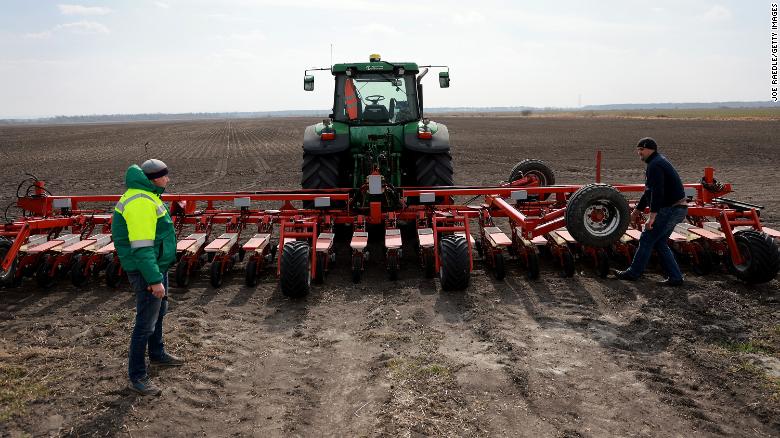 (CNN)Russian troops in the occupied city of Melitopol have stolen all the equipment from a farm equipment dealership — and shipped it to Chechnya, according to a Ukrainian businessman in the area.

But after a journey of more than 700 miles, the thieves were unable to use any of the equipment — because it had been locked remotely.

Over the past few weeks there’s been a growing number of reports of Russian troops stealing farm equipment, grain and even building materials – beyond widespread looting of residences. But the removal of valuable agricultural equipment from a John Deere dealership in Melitopol speaks to an increasingly organized operation, one that even uses Russian military transport as part of the heist.

CNN has learned that the equipment was removed from an Agrotek dealership in Melitopol, which has been occupied by Russian forces since early March. Altogether it’s valued at nearly $5 million. The combine harvesters alone are worth $300,000 each.

CNN is not naming a contact in Melitopol familiar with the details of the case for their own safety. 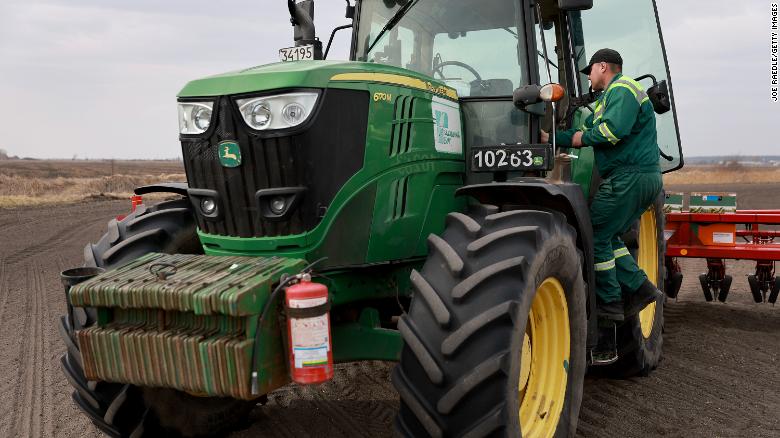 Ukrainian farmer Morda Vasyl steps into the cab of a John Deere tractor.

The contact said the process began with the seizure of two combine harvesters, a tractor and a seeder. Over the next few weeks, everything else was removed: in all 27 pieces of farm machinery. One of the flat-bed trucks used, and caught on camera, had a white “Z” painted on it and appeared to be a military truck.

The contact said there were rival groups of Russian troops: some would come in the morning and some in the evening.

Some of the machinery was taken to a nearby village, but some of it embarked on a long overland journey to Chechnya more than 700 miles away. The sophistication of the machinery, which are equipped with GPS, meant that its travel could be tracked. It was last tracked to the village of Zakhan Yurt in Chechnya.

The equipment ferried to Chechnya, which included combine harvesters — can also be controlled remotely. “When the invaders drove the stolen harvesters to Chechnya, they realized that they could not even turn them on, because the harvesters were locked remotely,” the contact said.

The equipment now appears to be languishing at a farm near Grozny. But the contact said that “it seems that the hijackers have found consultants in Russia who are trying to bypass the protection.”

“Even if they sell harvesters for spare parts, they will earn some money,” the contact said.

As war rages in Ukraine, ballet dancers return to the stage

Other sources in the Melitopol region say theft by Russian military units has extended to grain held in silos, in a region that produces hundreds of thousands of tonnes of crops a year.

One source told CNN that “the occupiers are offering local farmers to share their profits 50% to 50%.” But the farmers trying to work in areas occupied by Russian troops are unable to move their produce.

“Not a single elevator works. None of the ports are working. You will not take this grain from the occupied territory anywhere. “

So Russian forces are simply taking the grain, the source said. “They steal it, take it to Crimea and that’s it.”

Last week the mayor of Melitopol posted a video showing a convoy of trucks leaving Melitopol allegedly loaded with grain.

“We have clear evidence that they unloaded grain from the Melitopol city elevator. They robbed the elevator along with private farms,” the mayor told CNN.