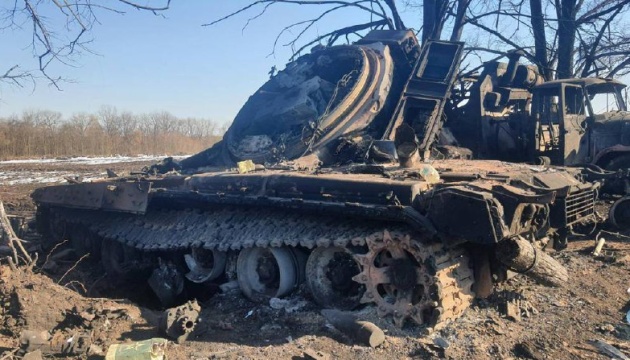 Russia continues its offensive operations in the eastern operational zone. In the Kharkiv region, the enemy tried to carry out assault operations, but those attempts were unsuccessful.

According to Ukrinform, the press service of the General Staff of the Armed Forces of Ukraine reported this on Facebook.

“The enemy’s offensive in the eastern operational zone is underway to defeat a grouping of the [Ukrainian] Joint Forces, establish full control over the Donetsk and Luhansk regions and secure a land bridge to the temporarily occupied Crimea,” the statement said.

In the Volyn and Polissia areas, the enemy was not active. Up to seven battalions of the Belarusian Armed Forces protect the Ukrainian-Belarusian border in the Brest and Gomel regions. Weapons and military hardware of the Russian Eastern Military District, mostly damaged, are being transported from Belarus to Russia.

In the Sivershchyna area, the border service of the Russian Federal Security Service continues to intensify the protection of the Ukrainian-Russian border in the Bryansk and Kursk regions.

The General Staff also said that the regrouping of units of the Russian Central Military District is underway. The enemy plans to move the anti-aircraft gun division of the 14th Guards Army from the Kursk region to the Belgorod region.

In the Slobozhanshchyna area, the enemy transfers the enemy’s weapons and military equipment to the Kupyansk area. The occupiers continue to partially block the city of Kharkiv.

The enemy is also intensifying offensive and assault operations in the areas of Pashkove, Dovhenke and Velyka Komyshuvakha. The enemy was unsuccessful, suffered losses and was forced to retreat to previously occupied frontiers.

In the Donetsk and Tavriya directions, the enemy is increasing control and air defense systems, firing on the positions of Ukrainian troops from mortars, artillery and multiple rocket launchers along the entire line of contact. Operational-tactical aircraft are used to launch air strikes.

In the Sievierodonetsk area, the enemy tried to carry out assault operations in the direction of the settlements of Lyman and Yatskivka, but those attempts were unsuccessful. The occupiers established control over part of the village of Zarichne. The enemy tried to gain a foothold in the western, northwestern and eastern parts of Rubizhne, but failed. The enemy began advancing towards the settlements of Orikhove and Nyzhnie.

In the Popasna area, the occupying forces tried to gain a foothold on the achieved frontiers. The enemy also regrouped and replenished personnel and ammunition.

In the Kurakhove area, with the support of artillery, the enemy attempted an offensive in the direction of the settlements of Novomykhailivka and Marinka.

In the Mariupol area, the invaders continued shelling and fighting in the area of the Azovstal steel works. The enemy launched air strikes on civilian infrastructure. The occupiers carried out assault operations towards the settlement of Vremivka, suffered losses and retreated to previously occupied positions.

The General Staff also noted that in the temporarily occupied territories of Ukraine, the Russian occupiers are introducing measures restricting the rights and freedoms of civilians, including freedom of movement.