“The war between the Russian Federation and Ukraine has ceased to seem impossible”: what the journalist Muratov was talking about during the Nobel Peace Prize (photo, video)

Muratov in his speech called for an end to war propaganda and militaristic rhetoric. He also proposed to create an International Tribunal against Torture. 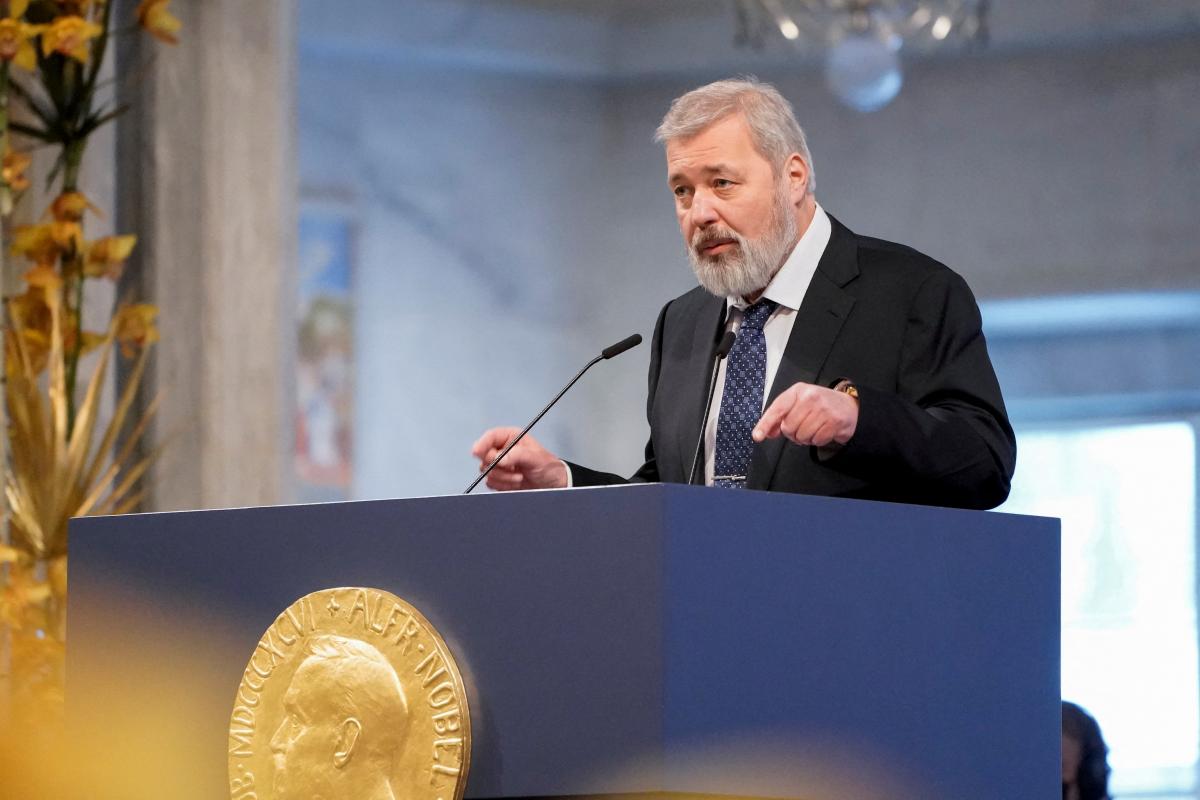 On December 10, the Nobel Peace Prize ceremony took place in Oslo, Norway. In 2021, it was split between Dmitry Muratov, editor-in-chief of the Russian opposition newspaper Novaya Gazeta, and Maria Ressa, a Filipino journalist.

The journalists were awarded “for their efforts to preserve freedom of expression, which is a prerequisite for democracy and peace.”

During the ceremony, Muratov and Ressa were awarded diplomas and gold medals of the laureates and they made speeches. 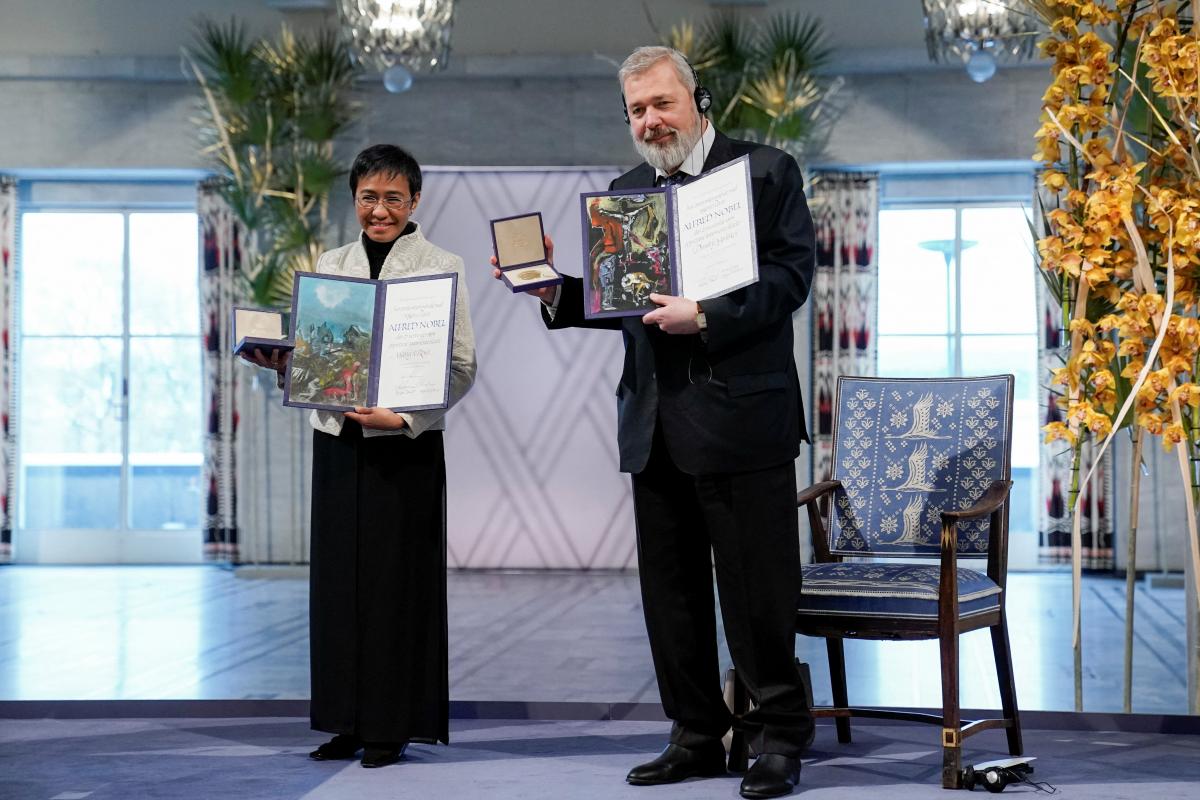 In 2021, the Nobel Peace Prize was shared by Dmitry Muratov, editor-in-chief of the Russian opposition newspaper Novaya Gazeta, and Maria Ressa, a Filipino journalist / photo REUTERS

Muratov began his Nobel speech, the complete transcript of which was published by  Novaya Gazeta , with a quote from the speech of another Peace Prize laureate, Academician Andrei Sakharov: “Peace, progress, human rights – these three goals are inextricably linked.”

Muratov spoke about human rights violations in Russia and other countries for most of his speech, which was called “Antidote from Tyranny.” He mentioned the dictatorial regime in Russia, actively promoting the idea of ​​war.

According to the editor-in-chief of Novaya Gazeta, the world fell out of love with democracy and was drawn to dictatorship, and the war began to seem like something acceptable under the influence of “aggressive marketing.” Muratov noted that it is customary in Russia to think that politicians who avoid bloodshed are weak, and military threats are “the duty of true patriots.”

“Governments and propagandists close to them bear full responsibility for the militaristic rhetoric on state television channels,” he said. “Current ideologues are promoting the idea of ​​death for the Motherland, not life for the Motherland.

Muratov drew attention to the fact that the migration crisis on the border of Belarus and the European Union, inspired by Alexander Lukashenko, was added to the war in eastern Ukraine. The journalist described this situation as “a game on the verge of big blood.”

Calling for an end to militaristic rhetoric, Muratov quoted another Nobel laureate, former Soviet President Mikhail Gorbachev. According to the journalist, on April 18, 1988, at a meeting of the Politburo, Gorbachev responded to the demand of one of the ministers to leave Soviet troops in Afghanistan with the phrase: “Stop your hawkish scream!”

“Stop the hawk screaming! Isn’t it a modern program for politics and journalism – to establish a life without funerals?” – said Muratov.

In his speech, he spoke about torture in prisons and during the investigation in modern Russia, about criminal cases on false charges, about the persecution of opposition politician Alexei Navalny, about the demand of the Russian prosecutor’s office to liquidate the Memorial society ( Memorial recognized in Russia as an organization carrying out functions of a foreign agent – UNIAN ).

“The people for the state or the state for the people? This is the main conflict today,” Muratov is convinced.

In this regard, the journalist took the initiative to create an International Tribunal against Torture, which would investigate cases of torture around the world.

“I am taking the initiative to create an International Tribunal against Torture, the task of which is to collect data on the use of torture in different parts of the world and states. light. Torture must be recognized as a grave crime against humanity, “Muratov called.

A significant part of the speech was devoted to journalism in Russia, which, in the words of the author, “is now going through dark times.” He recalled that over the past few months, more than a hundred journalists, media, human rights activists and NGOs have received the status of “foreign agents”, similar to the Soviet status of “enemies of the people”; many were unemployed and forced to leave the country.

At the end of his speech, Muratov stressed that the Nobel Peace Prize he received was a tribute to the entire professional community of journalists and his dead colleagues from the Novaya Gazeta publication. He urged to honor the memory of those representatives of the journalistic community who gave their lives fulfilling their professional duty.

“Let’s honor a minute of silence for our … fellow reporters who gave their lives for this profession, and support those who are persecuted. I want journalists to die old,” Muratov summed up.https://www.youtube.com/embed/B-fJQ_PeC4k

Ress and Muratov are the first journalists to receive the Nobel Prize since the German Karl von Ossietzky received the award in 1935 for exposing the secret Nazi rearmament program.

Dmitry Muratov is the third Peace Prize laureate in Russian history after Andrei Sakharov and Mikhail Gorbachev, given the Soviet period. Academician Yevgeny Chazov received another award for the organization “Doctors of the World for the Prevention of Nuclear War” founded by him.

The Nobel Peace Prize is awarded annually to individuals and organizations that have made outstanding contributions to peace. Awarded since 1901.