They walk in a column along the road: hundreds of migrants from Belarus set off to “storm” the Polish border (video)

Poland is already convening an emergency meeting due to the situation on the border with Belarus. 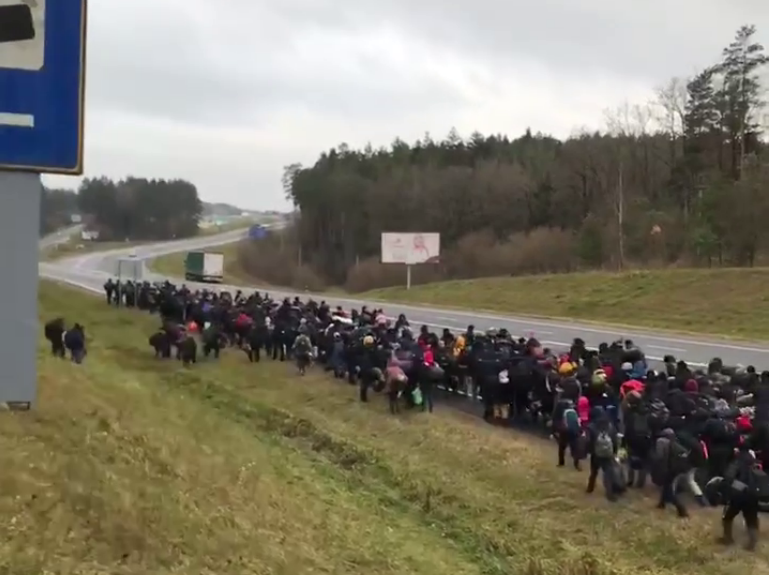 Hundreds of people with backpacks are moving towards Poland / screenshot

From the territory of Belarus, hundreds of migrants with backpacks went straight along the road towards the Polish border.

Most of the migrants in the convoy are Kurds who recently arrived in Belarus from Iraq. There are many women and children among them, according to the NEXTA Live channel.

It is reported that the Belarusian military with dogs drove the migrants off the road into the forest, but they did not reach the checkpoint. All of them are now less than one kilometer from the border with Poland.

Contrary to the official statements of the Belarusian regime, the refugees are on the territory of Belarus.https://www.unian.net/player/styUlj3t

Poland is already convening an emergency meeting due to the situation on the border with Belarus.

Stanislav Zharyn, Minister-Coordinator of the Polish Intelligence Services, called the accumulation of migrants at the border an attempt at a military invasion of Poland.

Deputy Foreign Minister Piotr Vavzhik expressed his conviction that Lukashenka is striving for an escalation, which will lead to the fact that “there will be fatal casualties on either side.”

A meeting of the anti-crisis team was convened with the participation of Prime Minister Mateusz Morawiecki, Minister of Internal Affairs Mariusz Kaminsky and Minister of Defense Mariusz Blaszak.https://www.unian.net/player/cuh1i1FRMigrants on the border of Belarus and Poland

Lithuania and Latvia, as well as Poland and Estonia accuse the Belarusian authorities of using illegal migrants as a weapon in the so-called hybrid war against the EU.

Earlier, the Polish parliament voted to legalize the expulsion of migrants at the border. The amendments to the law stipulate that migrants who illegally cross the border, detained on the spot, must leave the territory of Poland. They can also be banned from entering the country for a period of six months to three years. Following the amendment to the law, parliament also approved the construction of a € 353 million border facility to be equipped with motion sensors.

Lithuania began construction of a 508-kilometer physical fence on the border with Belarus to stop illegal migrants from entering the territory of the neighboring country.

In relation to Alexander Lukashenko , Germany launched an investigation due to the influx of illegal immigrants.