Top officials of the Russian Ice Hockey Federation pose for the photographs as they present a logo for the 2023 Ice Hockey World Championship planned to be held in Russia, on Sept. 21, 2021. For the new logo, Russia has used a fragment from the “Sportsmen” painting by Kazimir Malevich, the iconic Kyiv-born artist of Ukrainian and Polish origin. Russian officials said the logo was inspired by “Russian avant-garde.”Photo by Russian Ice Hockey Federation

At first glance, there was nothing unusual about the September presentation of the logo for the 2023 Ice Hockey World Championship planned to be held in Russia: Several top officials of the Russian Ice Hockey Federation entered the stage a moment before the bright red curtain opened and the audience could see the new emblem for the first time.

“The logo of the 2023 Championship was created as a tribute to the glorious Russian traditions in art and ice hockey,” the event’s host said. “It was inspired by the Russian avant-garde.”

The team used a fragment from the “Sportsmen” painting by Kazimir Malevich, the iconic Kyiv-born artist of Ukrainian and Polish origin.

“A man who was born in Ukraine and had a vast amount of his artworks and activities done in Ukrainian cultural context,” Ihor Chornyi, the spokesperson of the Ukrainian Institute of National Remembrance, told the Kyiv Post.

Calling Malevich Russian was not an honest mistake but another display of Russia’s propaganda based on its centuries-long myth that Ukrainians, Russians and Belarusians are one nation, centered in Moscow. The myth has been used to entrench Russian imperialism, while undermining and weakening other national identities.

Countless achievements and products of Ukraine’s cultural and scientific heritage have been falsely credited to Russia. Malevich is just one of them.

“They want to show that the countries around them have no important value in terms of arts, science, sports and other spheres, and can only exist as part of this Russian Empire,” Chornyi said.

The theory of unified “Russian” people, which is still being used by the Kremlin, traces back to the 17th century’s political maneuver that was initially designed to save Ukraine from Polish domination but ended up binding Ukraine to Russia for centuries.

It was the 1654 Treaty of Pereyaslav that placed Ukraine’s eastern and southern portions under Russian sway, being named Little Russia (Malorossia) and New Russia (Novorossiya).

Ukrainian Hetman Bohdan Khmelnytsky wanted to use the alliance to strengthen the Zaporizhian Cossacks. But Russia had its own hidden plans for the Ukrainian territories — it needed them to build an empire.

After the Russian Empire was eventually proclaimed in 1721, it sought to stamp out the Ukrainian identity by cracking down on the Ukrainian language and culture. The empire soon banned Ukrainian as a subject and a language of instruction in schoolsand closed the most prominent center of Ukrainian culture, Kyiv Mohyla Academy.

So, it’s no surprise that Malevich had to travel to Moscow to study art there, Chornyi said. For that, and for the fact that he was born in the Russian Empire, Kremlin propaganda would later label Malevich as their heritage, constantly calling him a “great Russian painter.”

They keep conveniently ignoring Malevich’s strong ties to Ukraine. According to Chornyi, Malevich returned to Ukraine after his studies to work at the Kyiv Art Institute, where his creativity influenced another renowned Ukrainian painter Fedir Krychevsky.

“He called himself Ukrainian, he was writing letters in Ukrainian, and often the colors that he used for his earlier paintings were inspired by colors of that traditional Ukrainian embroidery,” Chornyi said.

The same happened to iconic Ukrainian novelist Nikolai Gogol, who was born in 1809 in Sorochyntsi village, now Poltava Oblast, but had to move to Saint Petersburg to make a career. Gogol’s novels, however, are best known for portraying the everyday life of the Ukrainian village, incorporating Ukrainian folklore and traditions. The museum of Gogol in Moscow says he was a “great Russian writer.”

“It is a part of any empire’s existence when it takes away resources, both material and cultural, from those whom it has colonized and conquered,” Chornyi said.

After the Russian Empire collapsed in 1917, the Russian imperial narrative hadn’t disappeared. The Soviet Union has also introduced the concept of the single “Soviet people,” which was similar to the Russian Empire’s “one people” myth. Although Soviet authorities did not deny the existence of Ukrainians as a people, they denied Ukraine’s right to be a nation, said Ukrainian historian Yaroslav Hrytsak.

“Because the nation must have its own culture, its own science and also politics,” Hrytsak told the Kyiv Post.

Hence Serhiy Korolev, a Soviet space program’s chief designer, a Ukrainian from the provincial capital of Zhytomyr, who was crystal clear about his identity — in a student inquiry form dated 1925, the future great engineer answered his ethnicity as Ukrainian — was still falsely claimed by Russia.

“The Soviet Union was the world’s last empire,” Hrytsak said, adding that most former empires do not claim their former colonies and their heritage anymore. “Except for Russia.”

The modern Russian Federation follows the historic tradition of both the Russian Empire and the Soviet Union, spreading a similar imperial narrative, according to Chornyi. Through more than two decades of Russian President Vladimir Putin’s rule, the country has greatly strengthened its anti-Ukrainian propaganda to devalue Ukraine and bring it back under the Russian rule.

“The more they convince us and the world that our famous historical figures belong to them, the more rights they will have to politically claim certain territories and countries,” Chornyi said.

Putin’s latest letter is another example of how the Kremlin falsifies Ukraine’s history: Published in Ukrainian and Russian, the article starts with the statement that “Ukrainians and Russians are one people, one whole.” Putin twists the history of Ukraine, from the times of the Kyivan Rus, the federation of Slavic states, to the modern times.

“It is an outrageous cynicism,” Hrytsak said. “In this sense, Putin went even further than the Russian Empire and the Soviet Union.”

In 2016, Putin unveiled a giant statue of the Kyivan Rus Grand Prince Volodymyr the Great, the father of Yaroslav the Wise, in front of the Kremlin.

Volodymyr, an Orthodox Christian saint, introduced Christianity to Kyivan Rus in 988. But there are no direct links between Moscow and the prince, given that Moscow was founded more than a century after his death. 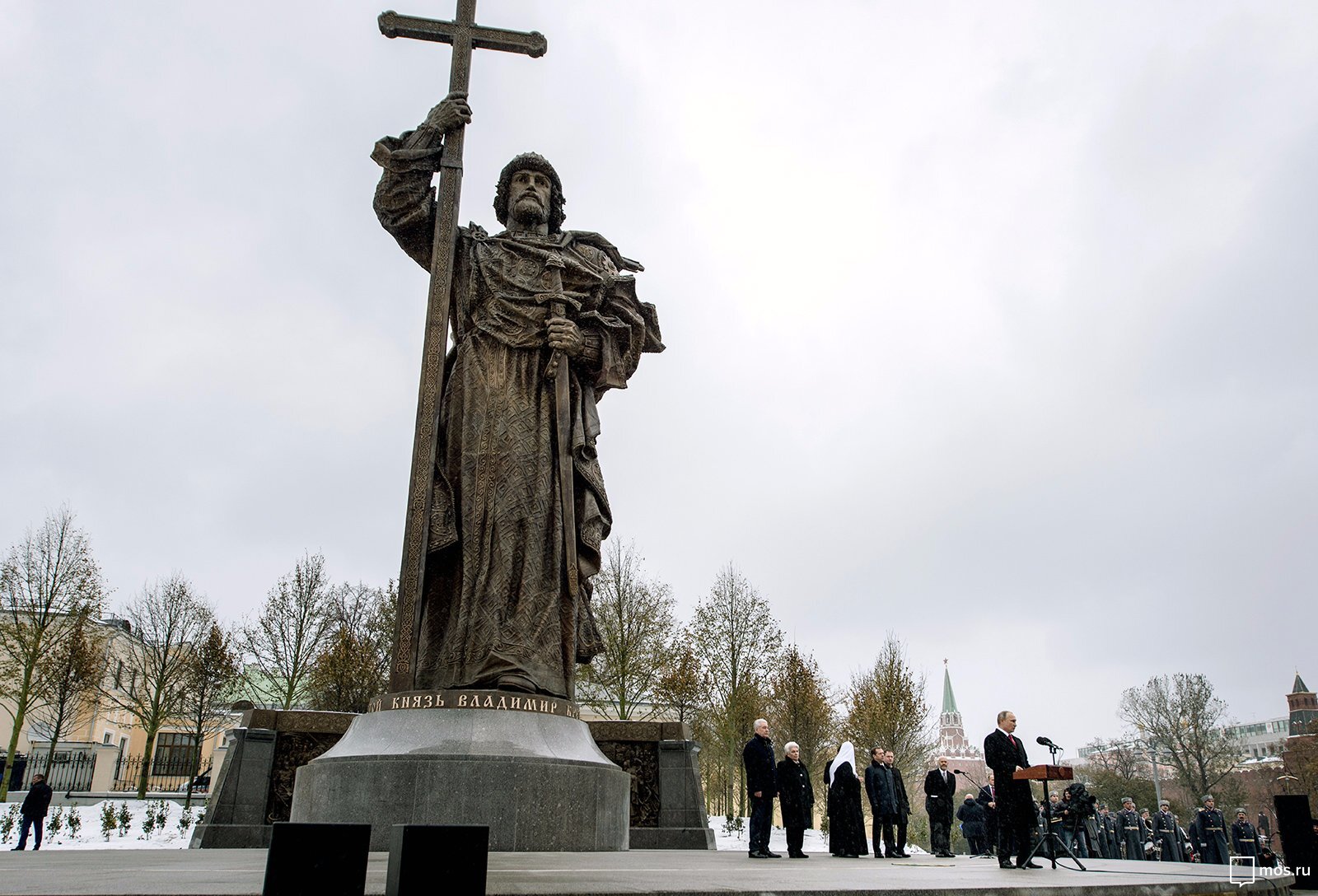 Russian President Vladimir Putin presents a monument of the Kyivan Rus Prince Volodymyr the Great in Moscow on Nov. 4, 2016. The prince introduced Christianity to Kyivan Rus in 988. His giant statue was set up in front of the Kremlin, in line with Putin’s propaganda that the Kyivan Rus’s historical legacy is Russian. (mos.ru)

In 2018, during his visit to Versailles for a joint press conference with French President Emmanuel Macron, Putin called Anna of Kyiv, the daughter of Yaroslav the Wise, as the “Russian Anna, Queen of France” thus claiming that both Anna and Yaroslav the Wise were Russian royalty.

The Kremlin uses such propaganda to justify its occupation of Ukraine’s Crimean Peninsula and the war in the Ukrainian Donbas, historians say.

Another aim of this propaganda is to strengthen Russia’s image as a state accomplished at science, engineering, the arts and more.

Thanks to Korolev, for instance, the Soviets declared many firsts in the Space Race.

To spread its propaganda, Russia distributes its messages via a large number of channels including state-owned media, various conferences, publications, studies and more.

In March, the Russian Federal Agency for the Commonwealth of Independent States Affairs, also known as Rossotrudnichestvo, announced a teleconference with the Russian House in Kyiv, on the day of remembrance of “Russian-Ukrainian poet Taras Shevchenko.”

Shevchenko is not only a prominent Ukrainian writer, but a figure so iconic, he is considered one of the national heroes. In his literary works, Shevechnko was vocal about Russia’s blatant imperialism and oppression of Ukraine.

“When the propaganda rushes forward, it is already difficult to control and stop it,” Chornyi said.

But no matter how ridiculous it sometimes is, Russian propaganda works. Today many of the notable Ukrainian artists and scientists are known abroad as Russian.

The Museum of Modern Art History in New York, for instance, identifies Malevich as a Russian painter, though also stating he was born in Ukraine.

“Of course, this affects the image and recognizability of Ukraine in the world,” Chornyi said.

The world’s perception of Ukraine is still largely based on negative narratives of corruption, war and poverty. The country is often viewed through the prism of such tragedies as the Chornobyl nuclear disaster and Russia’s ongoing war in the east.

Hrytsak says that Ukraine’s negative image is also a result of Russian propaganda that claimed so much of the positive events and people that Ukraine could have been famous for internationally. Hrytsak says that British historian Norman Davies best described this technique: Ukrainians were called Russians when they did something good and only then called Ukrainians when they did something bad.

“Malevich is Russian but Stepan Bandera (Ukrainian nationalist leader who is accused of collaborating with Nazi) is Ukrainian,” Hrytsak said.

Another example of such unfortunate fame is the massive explosion at the Chornobyl nuclear power plant in Ukraine. Although it happened in the Soviet times, in 1986, Russia considers it to be a Ukrainian catastrophe.

The mission of bringing the first human into outer space — when Russian pilot Yuriy Gagarin orbited the Earth and landed safely in southwest Russia in 1961 — they consider to be a Russian accomplishment, despite the fact that Ukrainian Korolyov was the mastermind behind this triumph.

Chornyi believes that to change the world’s perception, Ukraine’s message should be stronger than the one of Russia. The country needs to invest in preserving and “claiming” back its cultural heritage, he says.

Hrytsak said that even small steps like making a better movie about fictional Cossack Taras Bulba — the 2009 Russian historical drama film based on Gogol’s novel of the same name — would be a small victory for Ukraine.

But it also depends on Ukraine’s success in reforms.

“As long as we can build an economy and a strong and legal state, then recognizability increases sharply,” Hrytsak said. “And the goal is not so far away.”