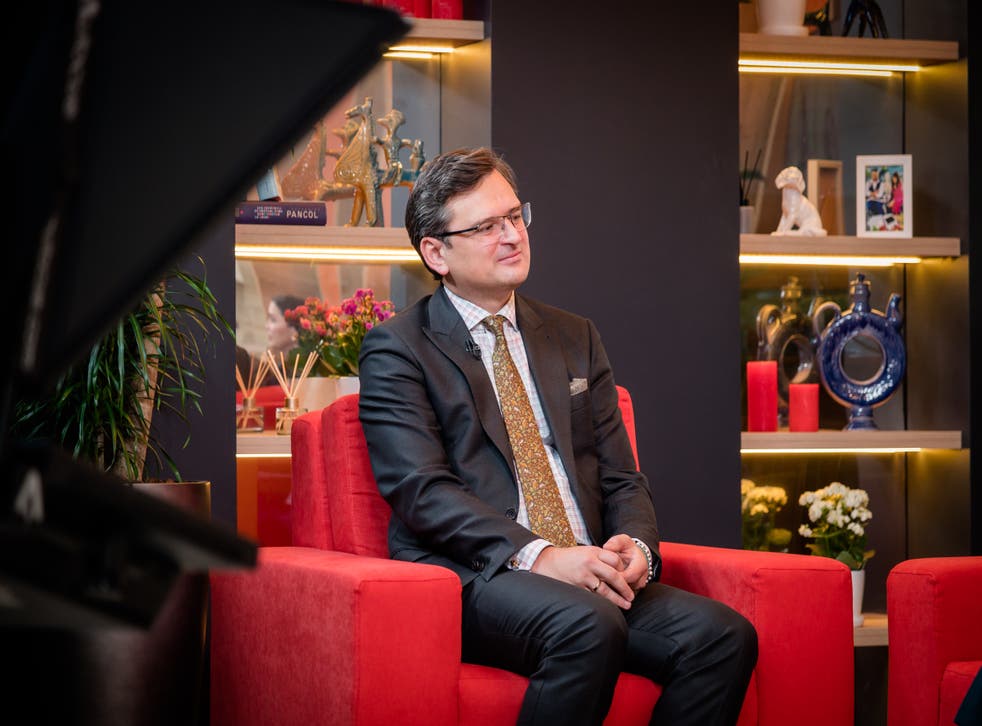 Smooth-talking Dmytro Kuleba is too much of a diplomat to admit he’s angry with the west.

One way or another, he’s been a front-row witness to some infuriating letdowns: a foreign ministry envoy when Europe issued meek statements of “concern” as Russia annexed Crimea and fanned conflict in the Donbas; deputy prime minister during “Ukrainegate”, when his country was weaponised by Donald Trump; and Ukraine’s youngest ever foreign minister, now fighting an increasingly rearguard battle to maintain international pressure on Moscow.

“This country has learnt a number of bitter lessons that western promises are likely unfulfilled,” he says. “We do not believe in promises.”

The 40-year-old says Ukraine has come to understand it can only rely on itself. What that means in the short to mid-term, he says, is learning to become an agile military state like Israel: “The circumstances leave no choice. Army, diplomacy and the Ukrainian people — that’s what we have to survive.”

Speaking with The Independent in Kyiv a day after his president warned of all-out war, Mr Kuleba says he believes Russia is trying to “encircle” Ukraine. Part of that operation is unconventional — an attack on the idea of Ukrainian statehood by propaganda, fake news and strange historical essays by the Russian president. But there are worrying new developments in the conventional sphere too, most especially least along the 1,000km border with Belarus.

Relations between Kyiv and Minsk are at an all-time low. Last week, Alexander Lukashenko, Belarus’s embattled autocrat, moved closer into the Kremlin’s embrace by apparently agreeing to 28 new integration “programmes” with Russia. That, says Mr Kuleba, fundamentally changed the equation with respect to Ukraine’s porous northern frontier, which run through woodlands, wetlands, and the Chernobyl exclusion zone.

The ongoing Zapad-2021 joint Russian-Belarusian military drills — which extend along Ukraine’s northern, eastern and southeastern flanks — may simply be offering a taste of things to come.

“Frankly speaking, we have a problem now because we didn’t invest enough in the border,” Mr Kuleba says. “Now we look at it and see it as a perfect vulnerability for subversion groups or migrants Lukashenko might want to send over.”

Ukraine has yet to experience the deliberate channels of migrants from Belarus to Lithuania, Latvia and Poland — mainly because the migrants themselves, mostly middle class Iraqis, do not see Ukraine as a route to a more comfortable life in the European Union. Unlike Belarus, Ukraine also has a treaty commitment with Europe to take back any illegal migrants. But Kyiv expects things may change, the minister says.

Energy supply is another area where Ukraine is expecting serious new challenges from its eastern neighbours. Nord Stream 2, a new export gas pipeline between Russia and Europe that bypasses Ukraine, is due to come online in the coming days. Kyiv has been opposed to the project from the start, arguing that its aims are political in nature: to starve Kyiv of transit revenue and allow Moscow to reduce energy supplies to Ukraine proper. Many officials anticipate the Kremlin will find a way of cutting supplies to below the levels Ukraine needs for its own consumption, causing a crisis in the winter like the one seen in 2006.

The United States initially offered a strong defence of Ukrainian interests around the pipeline, introducing sanctions that halted construction. But earlier this year, President Joe Biden removed those restrictions as a gesture to Germany, Nord Stream’s main European sponsor. It was a major blow to Ukraine. A few weeks later another worrying indication of American intent was sent from the June 16 Geneva summit, in which presidents Biden and Putin appeared to agree on a truce of sorts. A messy withdrawal from Afghanistan then followed, signalling  perhaps most clearly America’s repudiation of its claimed role as a world policeman, and suggesting Kyiv might well expect further disappointment along the way.

Mr Kuleba agrees America is in the middle of a “leadership crisis”. But he says Ukraine’s security was one issue where the United States could demonstrate how serious it was again. “I spoke with one US senator who told me the United States should not screw up in Ukraine as it did in Afghanistan,” he says. From what the minister could glean from his recent trip to Washington, Joe Biden also remains personally invested in Ukraine. This was despite the 2020 scandal, in which Ukraine appeared, under extreme pressure from Donald Trump, to acquiesce to open an investigation into Mr Biden’s son.

“We diplomats are trained to read through many layers of every line,” Mr Kuleba says. “I think the US president is open to working with us and understands that it was the previous administration that pulled us into American domestic politics. He said he would not leave Ukraine alone vis-a-vis Russia, and that is a crucial commitment.”

Whatever the extent of Mr Biden’s backing, it certainly does not extend to membership of Nato and the European Union, which remain key, if distant aspirations for Kyiv. Ukraine was conspicuously excluded from the Nato summit earlier this year, and during opening remarks given to the YES security conference in Kyiv on Friday, President Zelensky said Ukraine did not intend to continue “knocking at a locked door no one intended to open”. The outgoing president of Estonia, Kersti Kaljulaid, added to the local outrage by suggesting Ukraine needed another 20 years of reforms before EU membership was possible.

For hundreds of years, the west lived with an understanding that Ukraine is part of the Russian world. Only now is it beginning to understand that, yes, there might be something different about us after all

Mr Kuleba argues the opposition to Ukraine’s Euro-Atlantic integration came not from supposed concerns over reforms or Ukraine’s perceived far right problem — which, he says, is “overhyped and overblown” — but primarily from fear of Moscow’s response. Ultimately, that meant membership would only be realistic if Russia were to become “much weaker” than it was now, or “do something so outrageous” that the west would be forced to make a gesture to Ukraine.

But the diplomat, who identifies as an “over-keen” student of history, insists he remains “relaxed” about the outcome.

“We are witnessing history in the making,” he says. “For hundreds of years, the west lived with an understanding that Ukraine is part of the Russian world. Only now is it beginning to understand that, yes, there might be something different about us after all.”