Kharkiv region is a golden feeder for corrupt officials who have been stealing state property for years. By “coincidence”, the reserve lands were issued to relatives by the former head of the Kharkiv Regional State Administration, and now – the candidate for mayor of Kharkiv Mykhailo Dobkin.

Fifty kilometers from Kharkiv is one of the most picturesque villages in the region – Stary Saltiv. Here – the main resort of Kharkiv region – Pecheneg reservoir and a beautiful pine forest. And it is here, behind a high fence, owned by the family of Mikhail Dobkin.

Previously, the surrounding natural resources belonged to the state. But they became private 10 years ago, when Mykhailo Dobkin , then the head of the region, gave his relatives 3 hectares of elite land for nothing.

Land here costs hundreds of thousands of dollars. But Mikhail Markovich’s relatives received them for pennies. According to “Money”, the annual rent of three hectares of forest along the coast costs the Dobkin family only 13 thousand hryvnias. It is about one thousand hryvnias a month. So little that Dobkin himself does not even remember the money. When asked by “Money” about how much he pays for the land that is rented here, he replied: “I can’t tell you. How much is charged under the contract, that’s how much we pay.”

Commenting that this is a meager amount of 13,000 hryvnias a year, Mykhailo Dobkin said: “не I do not conduct financial and economic activities. If you are interested, ask the cooperative. I am not its owner.”

“Money” found out that the owner of the land plot on the Pecheneg reservoir, according to documents, really is “Country cooperative” Veresk “”. But the founders of the cooperative, by a strange coincidence, are relatives of Mikhail Dobkin – wife Alla Dobkina, daughter Alla Dobkina-Gurevich and mother-in-law Anastasia Bozhenko.

So how did the Dobkin family take over elite hectares?

When Mykhailo Dobkin headed the Kharkiv region, he donated almost three hectares of pine forest to the family cooperative, according to the Kharkiv Anti-Corruption Center: for 49 years. We are talking about a land plot of 2.82 hectares in the village of Zarichne. “

The cost of elite land was estimated at just under 14 thousand dollars, which is equal to only four dollars per 100 square meters.

“According to our calculations, this is 200, 250 times less than the market value of land in the Pecheneg reservoir today,” the Kharkiv Anti-Corruption Center told Grosham.

The underestimation allowed Dobkin’s relatives to use the elite plot for life and pay pennies to the state. And Mikhail Dobkin himself, when asked to explain how this happened and whether he sees the transfer of land to his family cooperative as an abuse of office and a conflict of interest in general, does not find time to talk. “I’m busy meeting people today, I don’t have time to talk to you,” he told Money.

Mykhailo Markovych doesn’t need awkward questions now, because the election campaign has started in Kharkiv. And Dobkin is once again fighting for power. That’s why his alleged amnesia worsened.

“I will become the mayor and put things in order,” he said.

Well, really. After all, the conversation with him takes place in the yards of old, dilapidated Kharkiv dormitories. Here ordinary Kharkiv residents are waiting for a miracle. And Mikhail Dobkin comes to the voters on a valuable Land Cruiser and hands out another election promise. Tired of hard life, citizens greedily catch every word of the mayoral candidate.

But “Money” brings Mikhail Markovich back to reality and asks him to remember what he did for the people and what he did for himself, already in power. However, not wanting to answer awkward questions, Mykhailo Markovych first remarks that we are not from Kharkiv to communicate with us, and later asks the press secretary to protect him from Money agents: “Can I be protected from this active girl? I don’t have enough strength physically. Let’s finish. Please. ” Then Dobkin is guarded by his bodyguards. They ask “Money” to turn off the camera “

While Mikhail Dobkin is publicizing, “Money” inspects his possessions from the air. He surrounded a huge area of ​​pine forest with a few meters of wooden fence, which can be seen even from a bird’s eye view. The length of the fence is over a thousand meters. Near the coast from the helicopter we notice a large pontoon house, located just on the water. It is forbidden to build objects on this site. But Dobkin bypasses the law. He declares his estate not as a house, but as a water means “Tower”.

Screenshot from the declaration of Mikhail Dobkin

According to the co-founder of the socio-political project “Buttons Kharkiv” Denis Sigay, this is a common manipulation of terms. Which, unfortunately, really allows you to build a house on the water. “And make it a declaration as an object on the water,” he told Money.

However, this is not all. Serhiy Ovcharenko, a former employee of the Kharkiv Regional State Administration, who was a friend and right-hand man of Mykhailo Dobkin during his rule, also seized a piece of forest near the Dobkin family’s plot of land. When the decision was made to allocate land in the Pecheneg Reservoir, he headed the land commission. And, obviously, for the right decision he was awarded a piece of elite land.

The forest near Stary Saltov, seized by Dobkin’s relatives and entourage, is a clear example of how the “cooperative” scheme worked – the largest corruption scheme in the Kharkiv region, when hundreds of hectares of elite state land were raided by local authorities.

“Since Dobkin was mayor, the city has lost 900 hectares of land. Experts estimate it at 5 billion hryvnias in losses to the city budget. – says Denis Sigay.

The cooperative scheme worked successfully from 2008 to 2016. Land was removed through artificially created cooperatives.

“Conventionally speaking, a housing cooperative is created on the 19th, and on the 20th he has already written a request to the city council to allocate land. And on the 21st there is a session of the City Council, where deputies vote and allocate this land to private cooperatives. That is, roughly speaking, “It takes three days,” Mark Kopyl, the founder of the Buttons Kharkiv socio-political project, told Grosham.

In 2018, the Prosecutor General’s Office announced that Mikhail Dobkin was suspected of stealing state land. According to journalist Pavel Fedosenko, when this whole cooperative scheme came to an end, investigative actions began and then it was said that the land was taken out for 4 billion hryvnias. “A number of city council officials and former officials of the regional administration are on trial in this case. Among them is Mykhailo Dobkin,” Pavlo Fedosenko said.

Dobkin and his family have lived on this estate for many years. 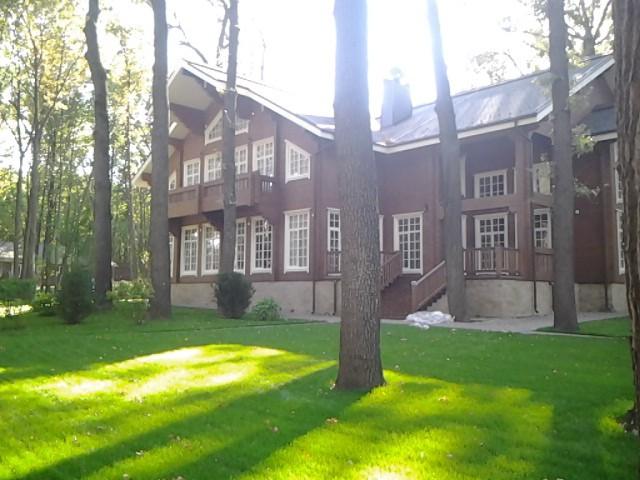 The land on which it is located is precious. This is an area of ​​the elite Kharkiv Forest Park, a protected area. Here the land costs millions. But Dobkin got it for nothing. It was bred according to the cooperative scheme already known to us.

“He even said that the land was handed over to a cooperative that served ZhSK. And then, well, it just so happened, he bought this cooperative. And there – once! – and this cooperative has this land… Well, such a coincidence,” – Pavlo Fedosenko sarcastically tells.

The allocation of land in the Pecheneg Reservoir in 2016 was investigated by the Kharkiv Prosecutor’s Office. But the case was closed because the court did not find any abuse on the part of the regional administration. However, according to experts, the violations are actually obvious. Therefore, the editorial board of the “Money” program has already appealed to law enforcement agencies to resume the scandalous investigation and punish those guilty of deriban state land.

For a full story about how Mykhailo Dobkin did not want to talk to journalists about the deriban of the protected lands of Kharkiv region and what the hectares illegally transferred to private cooperatives owned by Dobkin’s relatives and himself look like, watch today in the new issue of the program “Money” at 19:25 on TV channel 2 + 2.