Why the United States should defend Ukraine against Russian aggression

As a champion of world peace, Ukraine has earned the support of the West. 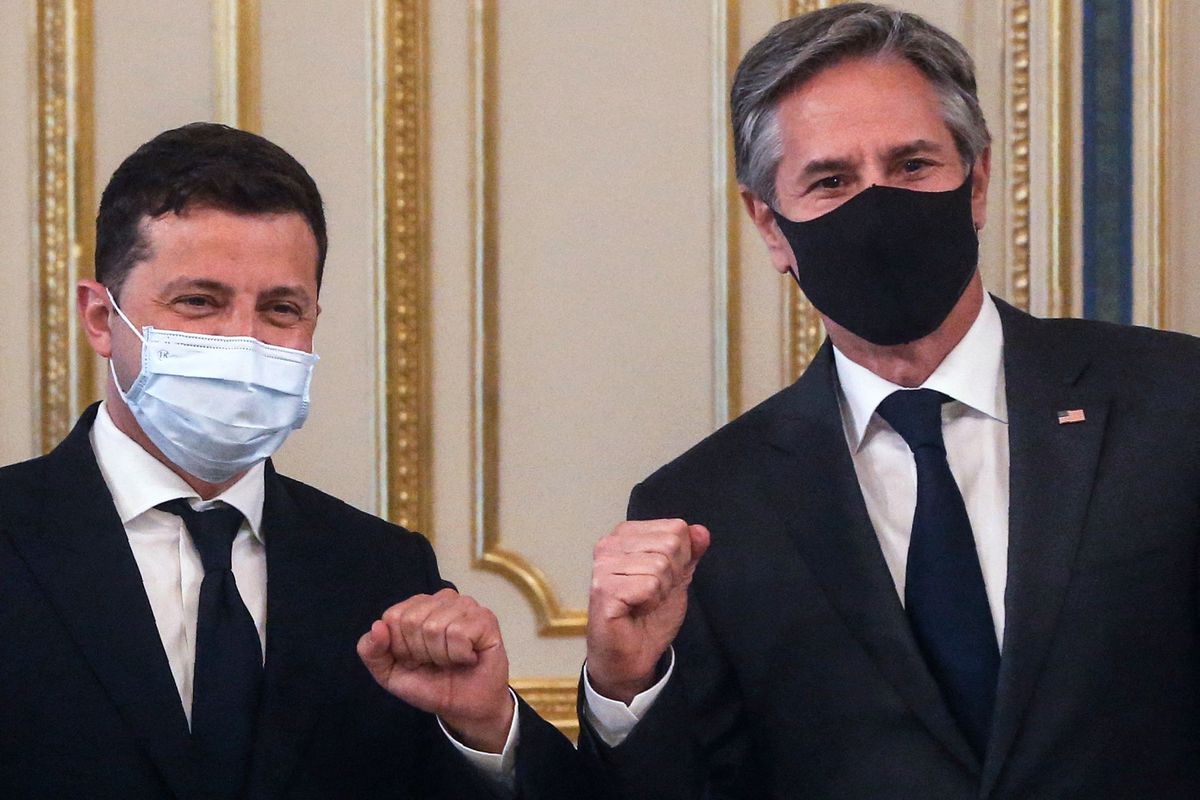 Ukrainian President Volodymyr Zelensky, left, and U.S. Secretary of State Antony Blinken pose for a photo at a meeting in Kiev, on May 6, 2021. Getty

In late April, thousands of Chicagoans of Ukrainian descent breathed a sigh of relief after Russia began withdrawing 150,000 troops massed along Ukraine’s border. Until President Joe Biden and other Western leaders imposed new sanctions against Russia and reaffirmed their support for Ukraine, war had seemed imminent.

This August, Ukrainians will celebrate the 30thanniversary of their independence. But Ukraine’s sovereignty remains under siege.

A friend who lived in Ukraine for many years once told me that to understand the relationship between Ukraine and Russia we need to imagine the abused eх-wife of an alcoholic husband. After nearly 300 years of a forced marriage in which her citizens were constantly brutalized, Ukraine formalized her divorce in 1991. Still, her morbidly jealous eх refuses to accept that she is free and better off without him.

Russian President Vladimir Putin refuses to accept the breakup of the Soviet Union. Determined to restore the glories of the Soviet past, Putin would have his people believe that Josef Stalin was not a depraved mass murderer responsible for the deaths of millions, but an ironfisted role model Russians should rehabilitate and venerate. (Imagine the international uproar if German Chancellor Angela Merkel tried to rehabilitate Hitler or downplayed the Holocaust.)

Though hard-pressed to effectively govern 14 time zones worth of territory, (from the Baltic to Vladivostok), Putin seems obsessed with subduing his fiercely defiant neighbors. Not even his latest landgrabs (Crimea and the Donbas) can satisfy Putin’s appetite for imperial expansion.

For all his blustering machismo, Putin has reason to feel insecure. The people of Russia and Belarus have mounted significant protests against their authoritarian governments. Putin is still haunted by Ukraine’s 2013-2014 Revolution of Dignity when millions of Ukrainians withstood months of bitter cold, police beatings and government snipers but ultimately ousted a despotic pro-Russian oligarch. Their non-violent dissident movement from the 1960s through the 1980s and their Orange Revolution of 2004 rivaled the most remarkable achievements of Gandhi, Walesa and Martin Luther King, Jr.

As a champion of world peace, Ukraine has earned the support of the West.

In 1994, Ukraine became the first nuclear power to dismantle its entire nuclear arsenal.

If any nation could justify a nuclear deterrent, it was Ukraine. Ukrainians had endured three centuries of colonialism, serfdom, slave labor and genocide — first under the Russian Czars, and later under the Soviets. In her award-winning book “Red Famine,” historian Anne Applebaum has chronicled how in 1932-33 Stalin ordered the systematic confiscation of grain and foodstuffs from Ukraine, resulting in a genocidal famine (the Holodomor). Millions starved to death.

Putin is trying to justify his aggression against Ukraine with a smear campaign labeling Ukraine a “fascist state.” Yet Putin himself has spent enormous sums of money destabilizing the West by funding neo-fascist groups in France, Denmark, Austria and elsewhere.

In contrast to many right-wing parties in Western Europe that won a substantial share of the national vote in recent elections (25% in France and 17% in Sweden), Ukrainians have rejected extremism and bigotry. In 2019 they elected Volodymyr Zelensky — a man of Jewish heritage — by a landslide of 73%. By contrast, Ukraine’s right-wing Svoboda Party won a paltry 1.6% of the vote. So, where is this “fascism” Putin keeps alleging?

Since 1991, Ukrainians have maintained a strong commitment to ethnic and religious pluralism. Unlike Putin’s Russia where the Russian Orthodoх Church enjoys nearly monolithic control over the nation’s religious landscape, Ukraine has fostered a far healthier ecumenical environment allowing for unimpeded proselytizing by Baptists, Mormons, Jehovah’s Witnesses and other faith communities. Ukraine’s Jewish community has also eхperienced a strong revival. And Ukraine’s Christians have provided sanctuary for the Islamic Tatar refugees that Putin forced out of Crimea.

The United States should continue supporting Ukraine — not only as a survivor of genocide, but as a resilient champion of democracy that has earned an honored place in the family of nations.

Aleхander B. Kuzma is chief development officer for the Ukrainian Catholic Education Foundation in Chicago.