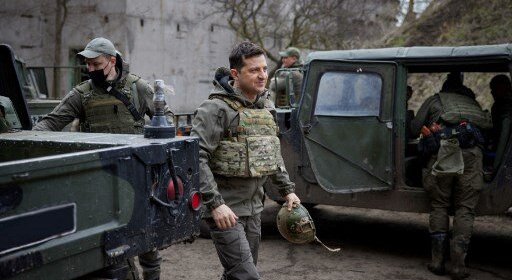 There is a sense that for the first time since the momentous events of 2014 resulted in a stalemate in eastern Ukraine, the situation has become fluid once more. Donald Trump is out of the White House. Joe Biden is much more of a traditional American politician shaped by the Cold War mentality and cognizant of Washington’s responsibilities in the international arena.

The government in Kyiv is starting to move against the pro-Vladimir Putin Fifth Column inside the country. Ukraine’s membership in NATO and the European Union suddenly doesn’t look like a pipe dream any longer — and Russia’s abominable Maria Zakharova has already started to shake a fist on that particular subject.

But Russia’s massing of its rusty hardware on Ukrainian borders in the east and south is likely to be an empty threat. Barring the possibility that Putin has taken leave of his senses (which is unfortunately quite real), Russia’s war against Ukraine remains a war of attrition. It can’t be resolved in some magical single blow.

Putin twice had a window of opportunity to invade. Both would have involved massive risks and Putin, who is cautious to the point of cowardice, chose not to act both times. Now it is too late — and invading will become more and more difficult with every passing day.

The first opportunity for an all-out invasion came early, when Ukraine was in the midst of a revolution, the military was nonexistent, government positions were held by ex-President Viktor Yanukovych’s appointees and sympathy toward Russia ran fairly strong among some Ukrainians. However, the Russian military was not prepared for an all-out assault on Ukraine or for a protracted occupation and partisan warfare that would have surely followed.

The second half of last year was perhaps another opportunity to stage an invasion, while the United States was in considerable disarray and preoccupied with the pandemic and the bitterly contested election. But the Ukrainian military by then had become considerably better organized, equipped, and trained and a move like that by Russia would have concentrated the minds in Western Europe, undoing all of Trump’s work of weakening NATO.

Be that as it may, those opportunities, however tenuous and even illusory, were not taken, and none will present itself again in the foreseeable future.

Russia could have gone about the whole Ukraine question in a smarter way. As late as the early 2000s Ukraine was still vitally dependent on Russia economically. Moscow could have developed economic ties, using some of the petrodollars that were pouring its way at the time to help Ukrainians achieve prosperity and accumulate wealth.

The problem with this scenario is threefold.

First, Russia, unlike the EU, has no economic model that could have benefited Ukraine. All it does is sell its natural resources to nations that turn them into wealth.

Second, Russia’s government is a kleptocracy. Officials at every level are busy stuffing their own pockets and don’t give a hoot for the well-being of their own people, let alone their neighbors.

And, finally, Russia wants Ukraine as a vassal state, not a prosperous independent one.

Russia as it currently constituted will never stop trying to bring Ukraine back under its colonial rule. It will continue to push and probe, massing troops on the borders, sending spies and assassins and recruiting agents, working to undermine Ukraine’s economy and weaken its government, accusing the Ukrainian military of war crimes, and so on.

It will keep staging military adventures such as the one in Syria in the hope of trading its “good behavior” for the Western recognition of its annexation of Crimea. But what Moscow ultimately wants is Kyiv.

And yet Russia can’t win against Ukraine. Its ultimate goal — to make Ukrainians stop being Ukrainians — is unrealistic. Even in the unlikely event of Putin imposing his will on Ukraine, there is simply no way Ukrainians will stop seeking independence after three decades as an independent state. The cat is out of the bag and Ukrainians will never submit to being “Little Russians” again.

Even when national aspirations have been quashed, it can only be temporary. Look at Chechnya. Ramzan Kadyrov has become a personal vassal to Putin in exchange for total control of Chechnya. He has built a de facto independent ethnic enclave within the Russian Federation. But he and his regime are not going to last forever. The infrastructure he has built for himself will be used sooner or later to gain real nationhood for the Chechens.

Nor could Ukrainians win against Russia. It will not be able to defeat the separatists in the east or get back Crimea as long as the Russian Federation remains as it is currently constituted. The road to Sevastopol and Donetsk runs through Moscow. Not only Putin has to go one way or another — that goes without saying — but Russia will have to collapse before Ukraine could restore its territorial integrity. Fortunately for Kyiv, Putin and his buddies are doing their best to achieve this outcome.