As Zelensky vows to take down oligarchs, attention turns to Kolomoisky

A protester holds a playing card with a portrait of oligarch Ihor Kolomoisky, former owner of PrivatBank, in front of a court in Kyiv on Feb. 8, 2021. The man protests against Kolomoisky’s attempts to take back control of the now state-owned bank.Photo by Volodymyr Petrov

Ihor Kolomoisky, facing mounting challenges to his billion-dollar business empire, remains a dominant player in
many sectors of Ukraine’s economy.

He’s defeated all opponents in the past. But his luck may be running out.

In Ukraine, Kolomoisky’s associates were charged with embezzlement in late February. Soon the oligarch was slapped with U.S. sanctions, banning him and his family from entering the country. The distinct possibility of a U.S. criminal indictment for money laundering is looming.

The U.S. sanctions were an unsubtle signal to President Volodymyr Zelensky that it was time to begin his long-promised fight
against oligarchs – perhaps starting with Special K.

Zelensky appears to have gotten the hint.

On March 12, the president issued a video address to the nation, vowing to go after oligarchs, including Kolomoisky. But the past has shown that the oligarchs, individually and collectively, are stronger than the state.

Kolomoisky retains his grip over Ukrnafta, the country’s largest oil company. He owns Ukraine’s only oil refinery. He produces 80% of
the country’s ferroalloy. He controls 15% of the TV market. And, by reliable estimates, he exerts strong influence over at least 50 of the 423 lawmakers in parliament.

Ihor Kolomoisky and his long-time business partner Hennadiy Bogolyubov have stakes in nearly every Ukrainian industry. Together, their possessions are worth billions of dollars.

Meanwhile, all eyes are on the investigation of PrivatBank, which Kolomoisky used to own and allegedly used to steal $5.5 billion with his cronies. It won’t be enough for Ukrainian prosecutors to charge several underlings without going after the boss.

“Criminal charges against Kolomoisky would be a real indication that the government is serious in its fight against him,” says Tetiana
Shevchuk, a lawyer with the Anti-Corruption Action Center, a Kyiv-based watchdog.

Kolomoisky denies PrivatBank embezzlement accusations, and challenges the nationalization of his former bank in courts. He didn’t comment on the U.S. sanctions against him.

When Zelensky was elected president in 2019, things looked very good for Kolomoisky.

After confrontation and self-imposed exile during much of President Petro Poroshenko’s five-year rule, he was back in Ukraine and riding high again.

Kolomoisky’s first year under Zelensky went well. Through political intrigues and pocket lawmakers, Kolomoisky gained control of Centrenergo, a state-owned energy company, and preserved his control over Ukrnafta, a state-owned petroleum producer where he owns a big minority stake.

He even helped sack the pro-reform government of Prime Minister Oleksiy Honcharuk, which tried to pry the oligarch’s grip from Centrenergo.

But now, near the end of Zelensky’s second year in office, Kolomoisky’s standing looks worse than ever.

After a four-year hiatus under Donald J. Trump, the U.S. is once again deeply invested in seeing Ukraine’s government battle corruption. Ukraine is expected to measure up.

On March 5, U.S. Secretary of State Antony Blinken called out Kolomoisky, accusing him of “involvement in significant corruption” and banning him and his family from entering the U.S.

“These sanctions showed that the Americans are dissatisfied that Kolomoisky has such strong influence,” says Shevchuk of the Anti-Corruption Action Center.

U.S. President Joe Biden has yet to have a conversation with Zelensky, which some political analysts believe is a deliberate snub until the Ukrainian president shows he means business in fighting corruption.

On March 15, Prosecutor General Iryna Venedyktova charged PrivatBank’s former CEO Oleksandr Dubilet and his deputy Volodymyr Yatsenko with embezzling $315 million. Yatsenko was pulled from a plane chartered by Kolomoisky as he tried to flee Ukraine – apparently after being tipped off about the coming arrest. 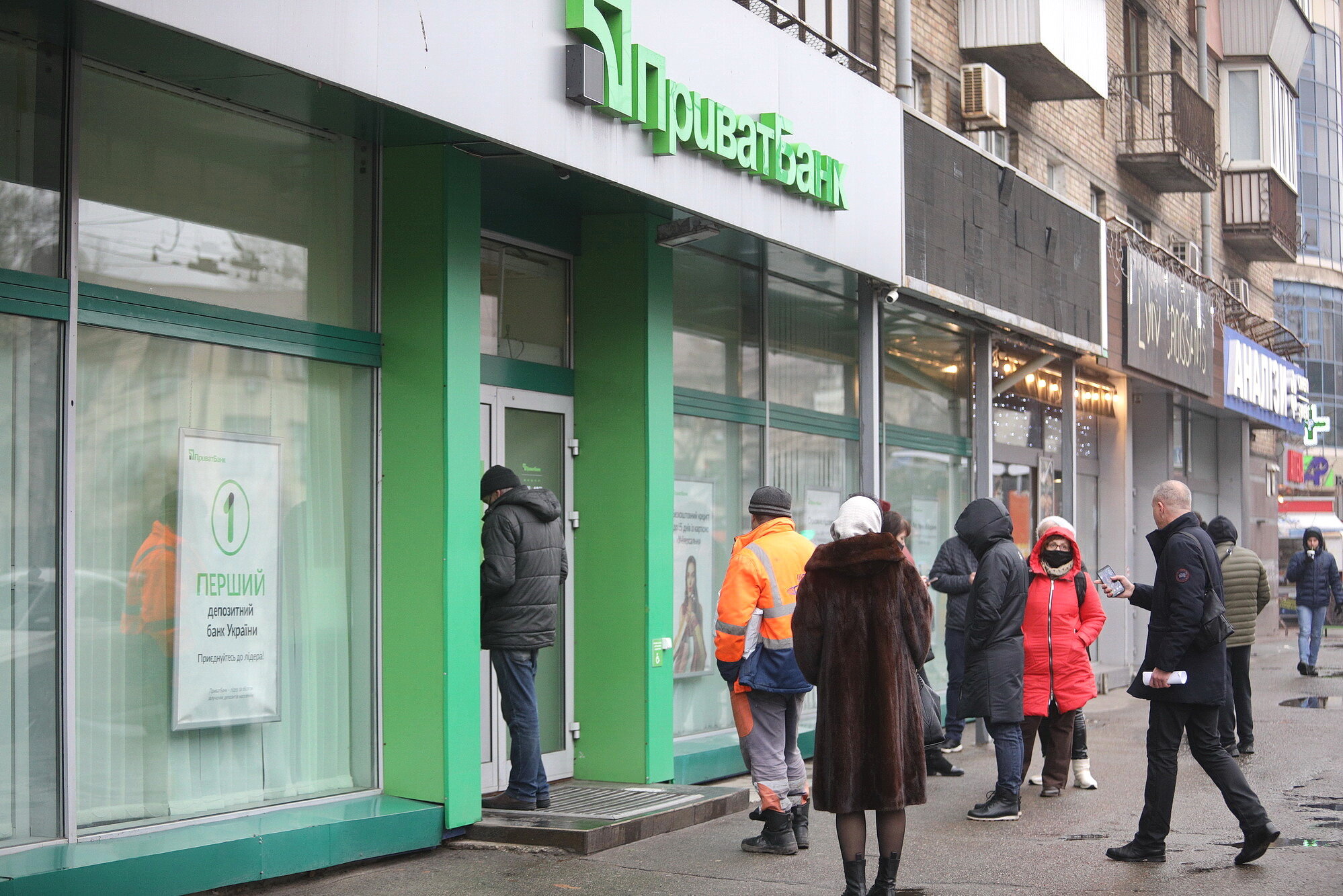 People line up in front of the PrivatBank branch in Kyiv on Jan 4, 2021. Investigators found that $5.5 billion were allegedly stolen by the bank’s former owners, billionaires Ihor Kolomoisky and Hennadiy Bogolyubov. The bank was nationalized in 2016. (Kostyantyn Chernichkin)

Now, the National Anti-Corruption Bureau is investigating Kolomoisky and his business partner billionaire Hennadiy Bogolyubov for alleged theft of $150 million from PrivatBank, according to the Kyiv Post’s sources in the bureau.

In total, Kolomoisky and Bogolyubov are alleged of stealing $5.5 billion from PrivatBank before it was nationalized in 2016. PrivatBank is suing its former owners in the U.K, Ukraine, Cyprus and Israel to recover the money for taxpayers who had to bail out the now state-owned institution.

“Regarding the U.S. sanctions against the former owners of PrivatBank, we support this decision, and we are working to return the money to Ukraine. To return justice to Ukraine,” said Zelensky.

But the only step that really matters would be criminal bank fraud charges against Kolomoisky and legal actions against his other businesses in a bid to recover the PrivatBank money.

Kolomoisky’s strong standing comes from his vast assets in energy, industry, and media, as well as his political influence. He maintains influence over two state companies – Ukrnafta and Centrenergo.

The first indication that Zelensky is serious in protecting Ukraine’s interest would be ripping the state-owned companies out of Kolomoisky’s
hands.

The case of Centrenergo, which covers 15% of Ukraine’s energy production, is the best example of the oligarch’s influence. The State Property Fund owns 78.3% of the company. The same fund alleges that over Hr 100 billion ($3.73 billion) have been embezzled from the company since 2004.

The scheme is simple: Oligarchs with political power handpick the companies from which Centrenergo buys coal and gas, setting inflated prices. Then, they influence the prices by which Centrenergo sells electricity.

Since Zelensky took power in May 2019, Centrenergo began buying expensive gas from United Energy, owned by Kolomoisky through shell companies. At the same time, United Energy was buying the gas cheaply from Ukrnafta.

Then, United Energy bought more than half of electricity produced by Centrenergo in 2020 with a 25% discount. As a result, both state companies suffered losses.

Ukrnafta, already struggling, accumulated a $1 billion tax debt, which it settled in December in a three-way swap between Ukrnafta, its majority shareholder Naftogaz, and the government.

“The pricing in many instances wasn’t fair,” says Andriy Gerus, a lawmaker with Zelensky’s 245-member Servant of the People faction and the head of the parliament’s energy committee. “Centrenergo needs to be privatized as fast as possible.”

In May 2020, after a year-long court battle with Kolomoisky, the State Property Fund installed industry veteran Oleksandr Korchinsky as Centrenergo’s general director.

In Ukrnafta, the situation is more straightforward. Kolomoisky’s companies own 43% of Ukrnafta. The oligarch appoints 5 out of 11 board members.

Since 2004, Ukrnafta has been appointing CEOs nominated by this minority – in other words, by Kolomoisky.

In 2020, Ukrnafta was supposed to get a fresh start. The company was to be cleared of all debt and receive a new independent director.

It didn’t work. After the search for the new CEO reached its final stage in May, Ukrnafta’s supervisory board voted to terminate the competition and appoint the acting CEO of Ukrnafta, Oleg Gez, to the job.

Gez was supported by all five board members linked to Kolomoisky and, surprisingly, by one board member appointed by state-owned Naftogaz, which owns the majority stake in Ukrnafta.

Acting Energy Minister Yuriy Vitrenko said that the scandal forced his exit as a top executive of Naftogaz after he confronted Naftogaz CEO Andriy Kobolyev and said he could not work for the state energy company as long as Kolomoisky, a minority shareholder, controls Ukrnafta. Ukrnafta denies selling gas below the market rate and says that the oligarch doesn’t have a hold of the company.

Kremenchuk Oil Refinery, owned by Kolomoisky’s Ukrtatnafta, is the only big oil refinery in the country. The company is Ukraine’s largest producer of diesel, gasoline, jet fuel and bitumen, an integral element in construction and road repairs.

The oil refinery produces over 90% of Ukraine’s diesel and gasoline. However, because of imports from Belarus and Russia, Kolomoisky’s oil refinery accounts for only 50% of gasoline on the market and a mere 15% of diesel.

Kolomoisky’s oil refinery has been lobbying the restriction on imports of petroleum products. Ukrtatnafta says that Belarus and Russian state-owned companies receive subsidies and thus create unfair competition on the Ukrainian market.

However, Kolomoisky still manages to use the oil refinery to mingle with the market. Buying cheap oil from Ukrnafta, through United Energy, the oil refinery sells cheap diesel and gasoline to Kolomoisky’s gas station chains – Avias, ANP and Sentosa.

The three brands together have a total of over 1,000 gas stations, making them the largest chain.

Furthermore, Kolomoisky has direct control of over 500 gas stations owned by Ukrnafta.

According to Serhiy Kuyun, the head of oil and gas consultancy A-95, thanks to the oil refinery, the gas chains sell high-quality gasoline at low prices.

However, Kolomoisky has recently lost a chunk of his gasoline empire.

In mid-January, the Supreme Court ruled in favor of PrivatBank, allowing the now state-owned company to seize 247 gas stations from Kolomoisky.

Assets of DniproAzot and Biola beverage company were frozen awaiting the court’s rulings, while the oligarch’s Bukovel ski resort was transferred to PrivatBank.

Kolomoisky’s billion-dollar empire is built around companies he doesn’t own, while the companies that he actually owns are reliant on favorable legislation.

That’s why Kolomoisky’s key asset is his 1+1 Media Group, which owns three out of the 10 most-watched TV channels in Ukraine: 1+1, 2+2, and TET. Kolomoisky’s channel’s news segments and talk shows promote the owner’s agenda and give airtime to politicians favored by him.

In 2019, Kolomoisky’s TV was actively supporting Zelensky. The two are still connected through 1+1: The comedy shows produced by Zelensky’s company still run on Kolomoisky’s TV channel.

Although the oligarch never admitted it, media reports and investigations found evidence of Kolomoisky influencing at least 30 lawmakers from Zelensky’s Servant of the People faction.

That’s not all: Kolomoisky is the main backer of the 24-member For the Future group, led by lawmaker Ihor Palytsa, Kolomoisky’s associate. That means Kolomoisky influences some 50 out of 423 members of parliament. Without the support of those 50 lawmakers, Zelensky’s fractured party can’t pass almost any legislation.

Now, says Shevchuk, the ball is in Zelensky’s court.

“The question is will it all end with the president’s public address (against Kolomoisky) or will there be real actions,” says Shevchuk.