Khomchak: Russia’s aggression in Donbas is major threat to security of all NATO members 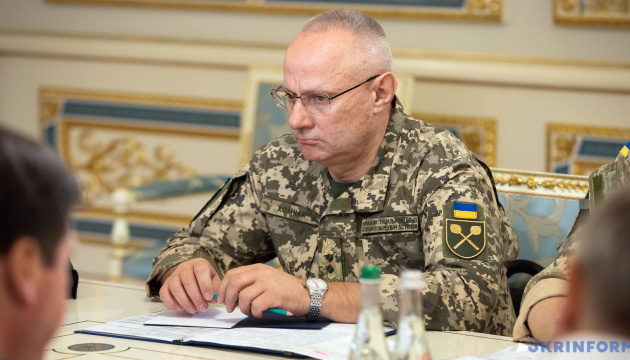 Commander-in-Chief of the Armed Forces of Ukraine, Colonel-General Ruslan Khomchak, stated that Russia’s armed aggression in Donbas is a major threat not only to Ukraine and its national security but to the security and stability of all NATO members.

“Russia’s armed aggression in Donbas is a major threat not only to Ukraine and its national security but to the security and stability of all Allies,” Colonel-General Ruslan Khomchak said in a phone conversation with Air Chief Marshal Sir Stuart Peach, Chairman of the NATO Military Committee, the General Staff of the Armed Forces of Ukraine posted on Facebook.

Khomchak also briefed Peach on the current situation in the area of ​​the Joint Forces Operation.

During the conversation, the parties paid special attention to the further development of the NATO-Ukraine military cooperation.

“As a friend of Ukraine, I would like to note the progress made by your Armed Forces. We will continue to find further ways to provide the necessary assistance to the Ukrainian army,” said Chief Air Marshal Sir Stuart Peach.

During the telephone conversation, Colonel-General Ruslan Khomchak thanked for the Alliance’s support for our state and praised the level of dialogue between the Armed Forces of Ukraine and NATO.

The parties also discussed countering the spread of COVID-19. Colonel-General Ruslan Khomchak informed about the start of vaccination of personnel of the Armed Forces of Ukraine. In addition, the parties agreed to coordinate further joint efforts to deepen the NATO-Ukraine cooperation within the framework of NATO’s Enhanced Opportunities Partnership, including during the regular meeting of the NATO Military Committee with Ukraine in the second half of March in Brussels.