The Prosecutor’s Office of BiH stressed that all necessary inspections would be carried out within the framework of the open case. 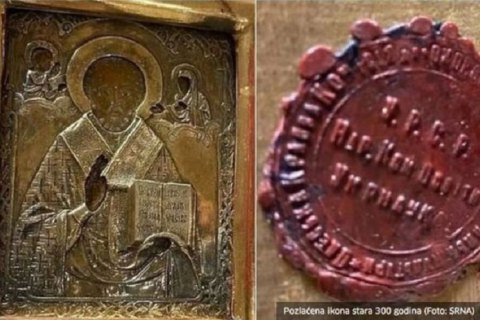 The Prosecutor’s Office of Bosnia and Herzegovina has opened a case on the fact of handing over an ancient Ukrainian icon to Russian Foreign Minister Serhiy Lavrov by the chairman of the BiH presidium, Serbian representative Milorad Dodik .

This was reported by Klix .

The Prosecutor’s Office of BiH stressed that all necessary inspections would be carried out within the framework of the open case.

It is noted that Interpol is likely to be involved in the case , as it is a violation of international regulations prohibiting the illicit trafficking of cultural heritage sites.

It will be recalled that on December 14, Dodik presented Lavrov with a 300-year-old icon , which was probably taken out of Luhansk. According to local media, to confirm the authenticity of the icon showed the official seal on the back. It states that the painting was the property of the Ukrainian SSR.

Local publications also point to Mr Dodik’s words that the icon was found in Luhansk.

This is not the first time Dodik has been embroiled in a scandal with Ukrainian diplomats. In March 2014, the Ukrainian embassy condemned the official’s statements in support of Russia’s annexation of Crimea. Last year, the Ukrainian Foreign Ministry also protested against Bosnia over Dodik’s statements “about Russian Crimea . “