Editor’s Note: This feature separates Ukraine’s friends from its enemies. The Order of Yaroslav the Wise has been given since 1995 for distinguished service to the nation. It is named after the Kyivan Rus leader from 1019-1054, when the medieval empire reached its zenith. The Order of Lenin was the highest decoration bestowed by the Soviet Union, whose demise Russian President Vladimir Putin mourns. It is named after Vladimir Lenin, whose corpse still rots on the Kremlin’s Red Square, more than 100 years after the October Revolution he led.

Science has always been around to get us all out of trouble.

It is thanks to science that we live longer, safer, and better than any other generation in human history, although many in the world are still suffering.

It has put millions of people into comfortable, air-conditioned offices instead of cornfields cultivated with primitive, exhausting manual labor. It has given us automobiles, smartphones, and unlimited 4G connection on the subway.

It put us on the Moon, and made it possible that one can complete a trip around the globe in 24 hours. Science has eradicated the deadliest diseases, such as smallpox or plague, that used to devastate continents in the days of old.

As we all saw this week, science again got our backs in the ongoing coronavirus pandemic.

As if we haven’t been hit hard enough yet, COVID-19 is now going on a new all-out global offensive against humankind. Again, many of the world’s nations, including Ukraine, are sustaining a new rise in virus contractions and getting back to drastic restrictions.

Many hoped the world would never have to see a coronavirus paralysis it had sustained in spring. But it looks like we will have to hold the line in a costly battle until our scientists complete building our ultimate weapon: the vaccine.

And on Nov. 9, a dispatch from this theater of war brought joyful news: the world’s first confirmed cure has successfully passed the third and the final stage of clinical testing. This means that our big gun will soon be ready to be approved for mass production and use.

The vaccine was developed by U.S.-based pharmaceutical giant Pfizer and its German partner BioNTech. According to their statement, the vaccine is effective in 90% of COVID-19 cases, which is a surprisingly high number.

The development team rightfully called this “the great day for science and humanity.”

The creators say nearly 50 million doses will be produced for the world by the end of 2020, and more than 1.3 billion will become available next year. Most probably, the vaccine recipients will have to get two doses within three weeks, and even in terms of an unlikely second virus contraction, COVID-19 symptoms are going to be very mild.

The European Union, the United States, and Japan have already ordered millions of doses.

And this was a really bright moment of hope, the first ray of light at the end of the tunnel the humankind is going through now. The global battle of coronavirus is raging in full force, but now we know the answer: we’re going to prevail against yet another disease standing in the way of our civilization.

Within the next year or so, the vaccine, along with developments from other scientific teams, will become for the general population around the world, and planet Earth will get back to its norm. We’re going to resume traveling the world for fun and business, we’re going to get back to going bananas at live music shows and sports events. And most importantly, we’re going to start working to get the global economy recovered from the greatest depression since World War II.

We don’t yet know if this new vaccine works out perfectly with millions of recipients. We don’t know if it will be economically acceptable to purchase this vaccine in masses, given its extremely complicated terms of transportation and storage in terminal frost.

But what we know for sure is that our comfort, safety, and health, will again be ensured by scientists on the edge of humankind’s wisdom.

Ukraine is eagerly waiting for a moment we all can get back to our normal living.

Therefore, the Kyiv Post just can’t help but declare everyone working around the clock over a COVID-19 vaccine as undisputed friends of ours.

Hopefully, their work will get us all back in the game as soon as possible. And this is what we all should be thankful for — science will always find an answer.

Foe of the Week: Russia’s mission to OSCE

Some curious cases studied in this section are so obvious that they barely need any commentaries.

On Nov. 8, the Russian mission to the Organization for Security and Cooperation in Europe (OSCE) again made a fool out of themselves by posting on Twitter a picture of a journalist allegedly brutally detaining by riot police.

“The situation in Ukraine critical,” the tweet read, “in which journalists are exposed to all forms of discrimination, down to physical violence and life threats. Since the beginning of the year, 184 of free speech violation incidents, 80% among them being physical aggression.”

There was a slight problem with this tweet: it actually showed a picture of photojournalist David Frenkel being busted by Russian riot police in Saint Petersburg in 2017. 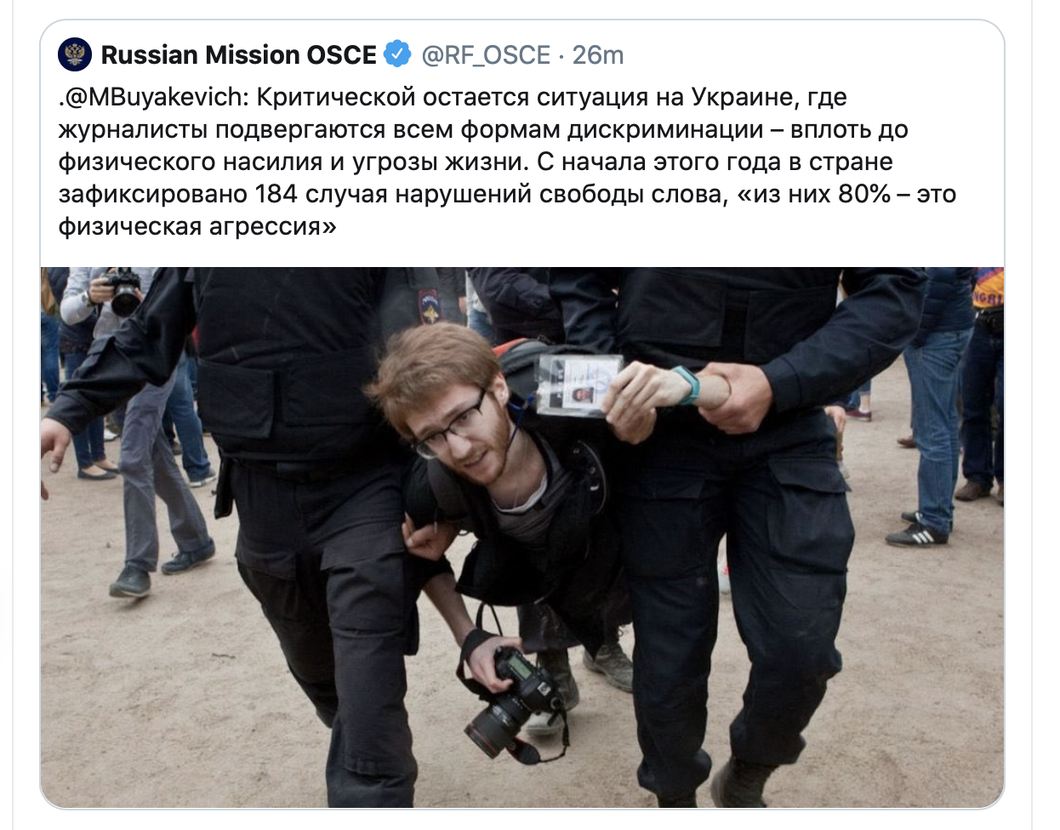 Frenkel used to work for Russian media outlet Mediazona at the time, and this news agency recognized the picture and launched the storm on social media shortly after it was posted.

Later in the day, facing a storm of mockery on Twitter, the Russian mission to OSCE deleted the tweet.

This embarrassing situation became a fortune of all independent media outlets that still survive in Russia.

For yet another time in many years, Russian diplomatic bodies have demonstrated that they are in many ways are nothing but just loudspeakers of Kremlin-sponsored propaganda that very rarely has anything in common with reality.

As it always happens, a liar has got totally entangled in his own lies.

Of course, Ukraine is not a safe haven for free press. Its media market is dominated by oligarch-sponsored TV channels, its government is then and again trying to regulate it for its own benefit with new legislation, and few independent media outlets survive only thanks to popular support and their own fundraising efforts.

But then again, what we have in Ukraine is a far cry from the brutal crackdown on press seen on the regular basis in Russia.

It is Russia that is considered one of the world’s least successful countries in terms of freedom of press. It is Russia where murders and arrests of honest journalists and opposition politicians like Anna Politkovskaya or Boris Nemtsov are happening almost on a regular basis.

In Ukraine, oppression of journalists and activists often become nationwide triggers for revolutions that wipe out regimes.

In other words, look who’s talking out there.

For their lies, the Russian envoys to OSCE get yet another symbolic Order of Lenin from the Kyiv Post.

Hopefully, it’s going to look fine in their long record of stupid lies regarding our country.