Erdogan accuses U.S. and Russia of supplying weapons to Armenia 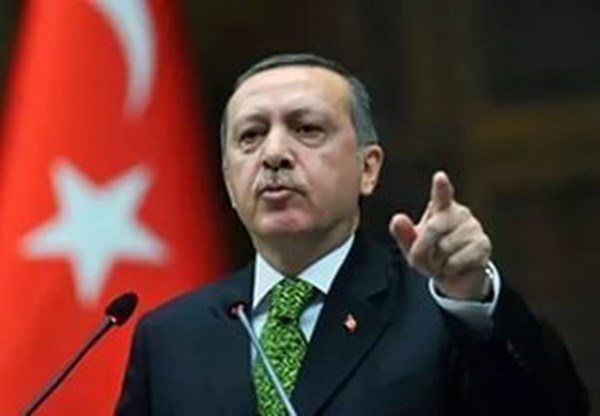 The co-chairs of the OSCE Minsk Group – Russia, the United States and France – are supporting Armenia with weapons, said Turkish President Recep Tayyip Erdogan during his party’s congress in Sirnak province, Haberler reports.

“Minsk trio, USA, Russia and France… They sided with Armenia. They provide all kinds of support to Armenia including weapons,” the Turkish president said.

Erdogan also said that Armenia for the second time violated the ceasefire in the conflict zone in Nagorno-Karabakh.

On Thursday, October 15, Azerbaijani President Ilham Aliyev said that Turkey’s participation in the conflict could significantly accelerate its end. “It is necessary to take into account the existing realities and the real situation, and they are such that without Turkey no issue can be solved in this region. This was shown by the history of recent years, and some may like it, some do not, but it is true,” Aliyev said. According to him, if Turkey participates in the process of resolving the conflict, it will end very soon and “the process of reconciliation will begin.”

Armenia, in turn, believes that the main goal of Azerbaijan and Turkey is the destruction of the Armenian people. Armenian Prime Minister Nikol Pashinyan called Turkey the main sponsor of the conflict. “By the decision and under the patronage of Turkey, it was decided to launch a war, an attack against Nagorno-Karabakh,” he said.

Yerevan has repeatedly accused Turkey of participating in the war, including using aviation, special forces and mercenaries from Syria. Armenia’s ambassador to Russia, Vardan Toganyan, reported that Turkey had moved about 4,000 mercenaries from Syria to the conflict zone. The presence of mercenaries in Nagorno-Karabakh was also reported by The Wall Street Journal, citing sources in Syria.

Azerbaijan and Turkey have denied Ankara’s involvement in the conflict, including the use of mercenaries.

The escalation of the conflict between Armenia and Azerbaijan over Nagorno-Karabakh began on September 27. The two sides blame each other for the beginning of the fighting.

Last week, the foreign ministers of the two countries, during consultations in Moscow, agreed to start a ceasefire on October 10 in order to exchange the dead and prisoners. However, almost immediately after the beginning of the truce, they accused each other of violating it.

On October 17, the ministers again held talks with Russian Foreign Minister Sergey Lavrov and agreed to start a new truce from midnight on October 18.

The historical region of Nagorno-Karabakh, whose population is predominantly Armenian, declared independence from Azerbaijan in 1991 under the name of the Nagorno-Karabakh Republic . As far back as 1987-1988, Karabakh representatives appealed to the Soviet leadership with a request to transfer the territory from the Azerbaijani USSR to the Armenian USSR but did not receive a positive response.

From 1992 to 1994 Azerbaijan tried to take control of the self-proclaimed republic which lead to full-scale military actions, with Baku and Yerevan using heavy artillery and aviation.

Armenian militias took control of several districts of Azerbaijan that were not part of the Nagorno-Karabakh autonomy before the conflict: Kelbajar, Lachin Kelbajarsky, Qubadli, Jabrayil and Sangelan districts in its entirety, Agdamsky and Fizulinskiy – partially. Only about 15% of Nagorno-Karabakh remains under Baku’s control.

In 1994, the countries agreed to a ceasefire and the conflict was frozen.

The last large-scale escalation occurred in April 2016, with both sides reporting more than 30 killed and dozens injured. The parties again agreed on a ceasefire.

Azerbaijan does not recognize the self-proclaimed Nagorno-Karabakh Republic and refuses to send its representatives in the negotiations on the settlement of the conflict.