Chernihiv, located just 140 kilometers north of Kyiv, is often associated with churches, cathedrals and other religious sites. Besides that, it attracts tourists with its wide range of affordable restaurants, wooden carvings on old buildings, nature and legendary stories.

With just about 280,000 citizens, Chernihiv is a fairly small city. That means, it can be fully explored in just a weekend.

A trip by car or bus from Kyiv’s Lisova metro station takes about two hours. It’s also possible to travel by commuter rail, which is the cheapest option, yet the longest – it will cost about Hr 80 ($2.80) and take 3.5 hours.

Choosing the latter option, you’ll arrive at the railway station, which German and Hungarian prisoners of war built after World War II. 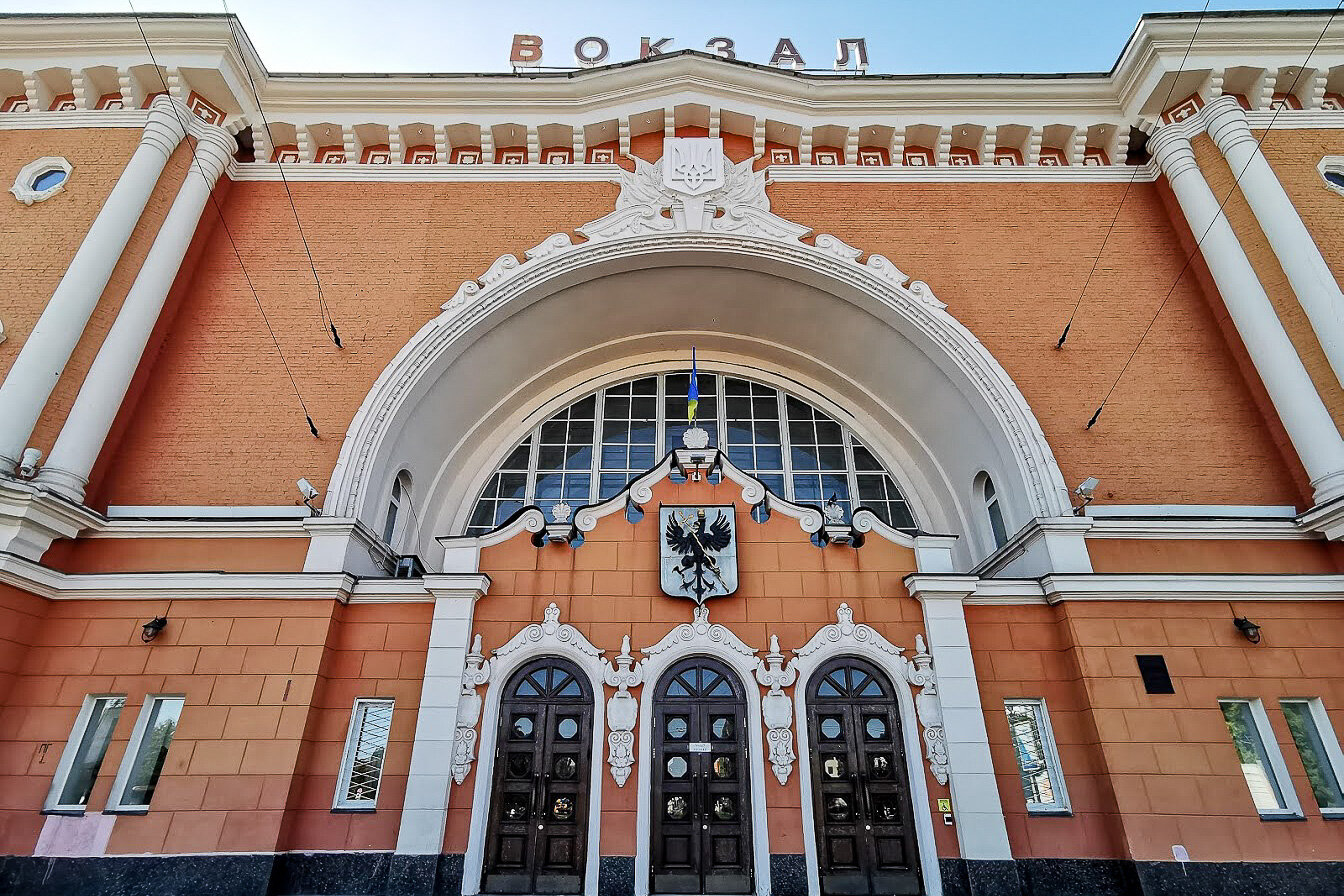 The entrance to Chernihiv’s railway station on Sept. 6, 2020.
Photo by Liza Semko 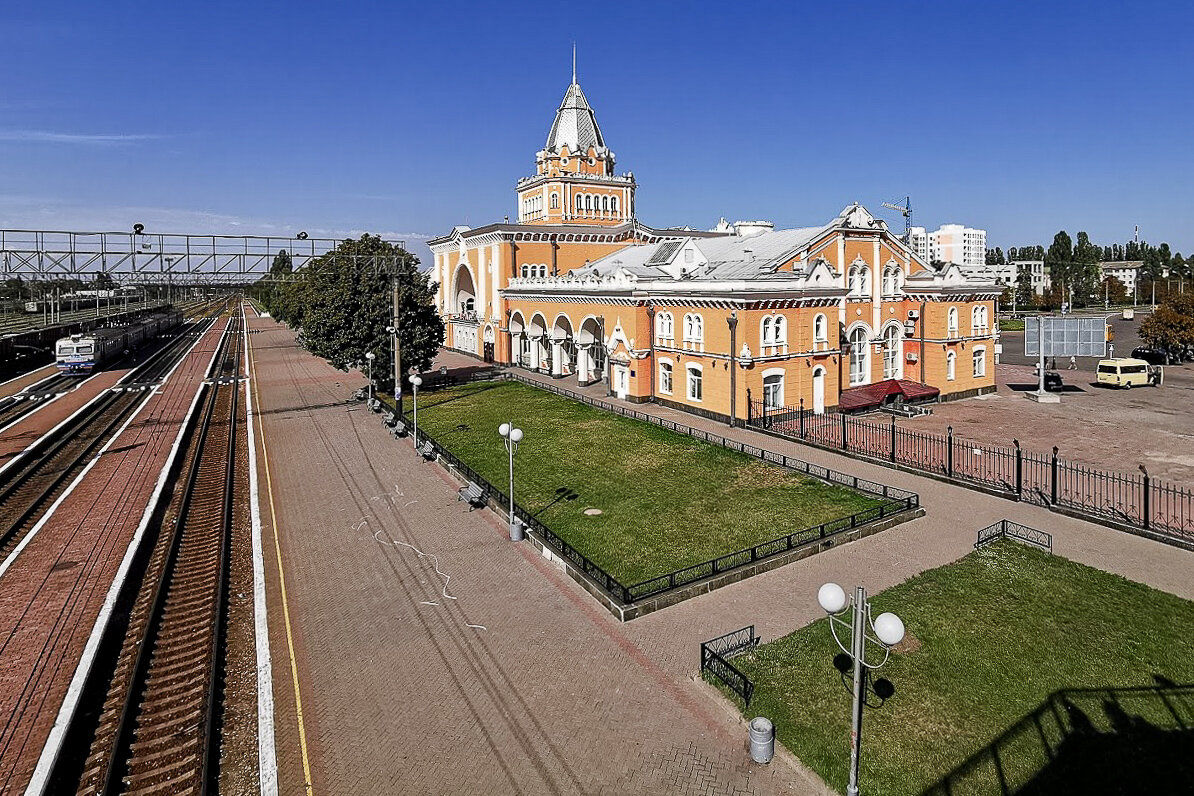 Chernihiv’s railway station viewed from a nearby bridge on Sept. 6, 2020.
Photo by Liza SemkoPrev012Next

Traveling by car or bus, one will see St. Catherine’s Church (Katerynynska) on a hill at the city’s entrance. It was constructed in the style of Ukrainian Cossack baroque. It was built in the 18th century in honor of the battle where Cossacks led by hetman (military commander) Yakiv Lyzogub captured the Turkish fortress of Azov in 1696.

In Chernihiv, the entrance to the city leads right into the city center, giving the impression that the center is actually located in the suburbs. A few steps from St. Catherine’s Church is the historic downtown Dytynets (or Val, as it’s called now), which was the fortified part of the city during the Kyivan Rus period.

It resembled a city in a city: Dytynets consisted of administrative buildings and houses where boyars (the aristocracy, ranking below the tsars) and church authorities lived. In the Cossack epoch, there was a fortress in the area, but it was destroyed in 1799.

There are many historical sites on Val: the Sviatopreobrazhensky (Transfiguration) Cathedral, St. Borys and Glib Cathedral, Colonel Yakiv Lyzogub’s (and then hetman Ivan Mazepa’s) residence, the archbishop’s house, a collegium and 12 cannons. Colonel Yakiv Lyzogub’s residence that changed its purpose at least five times. As of now, it’s a storage of artifacts artifacts from the Chernihiv Regional Historical Museum named after Tarnovskyi, on Sept. 5, 2020.
Photo by Liza Semko 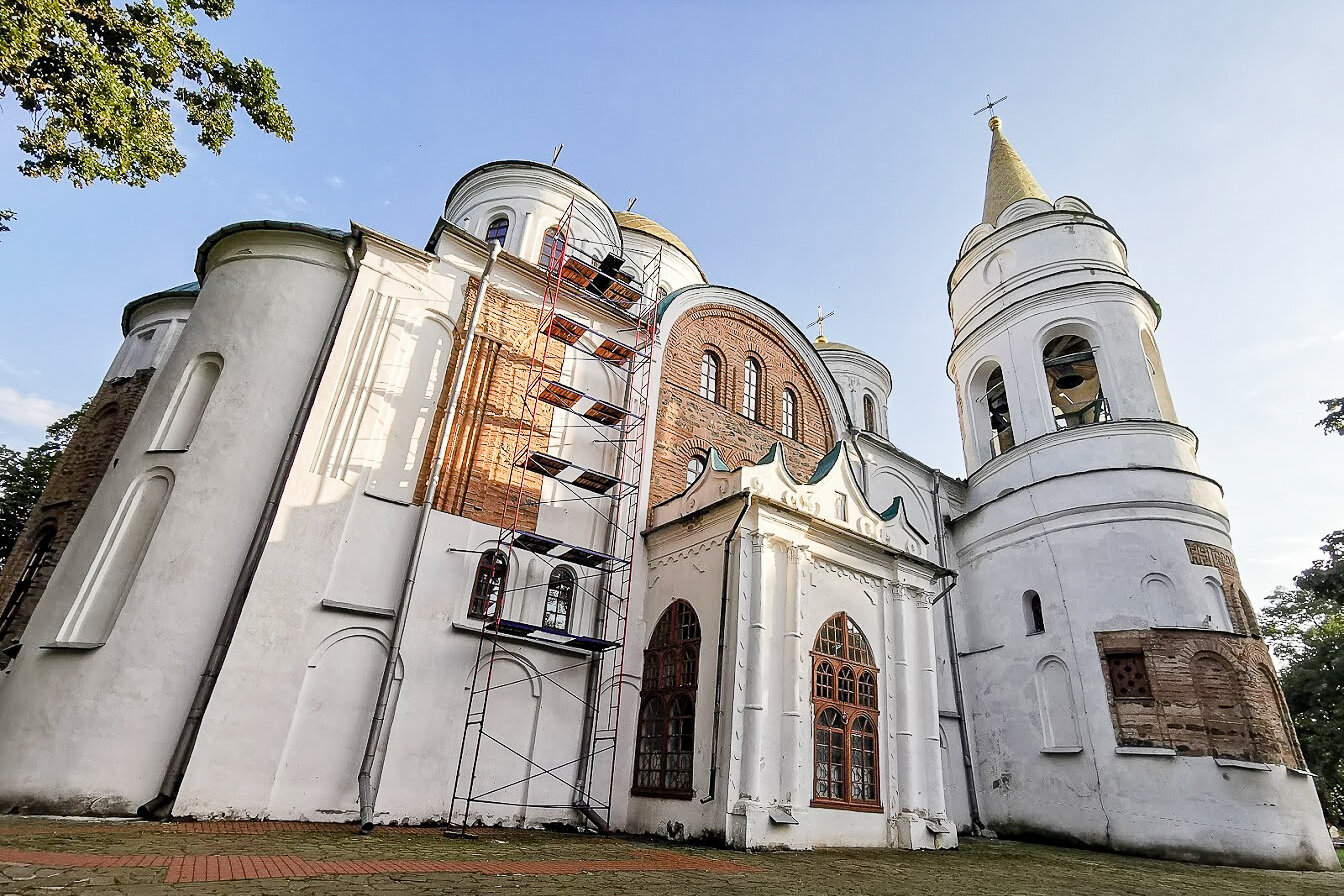 A view of the Sviatopreobrazhensky (Transfiguration) Cathedral in Chernihiv on Sept. 5, 2020.
Photo by Liza Semko A panoramic view of St. Borys and Glib Cathedral (L) and the Sviatopreobrazhensky (Transfiguration) Cathedral in Chernihiv on Sept. 5, 2020.
Photo by Liza Semko 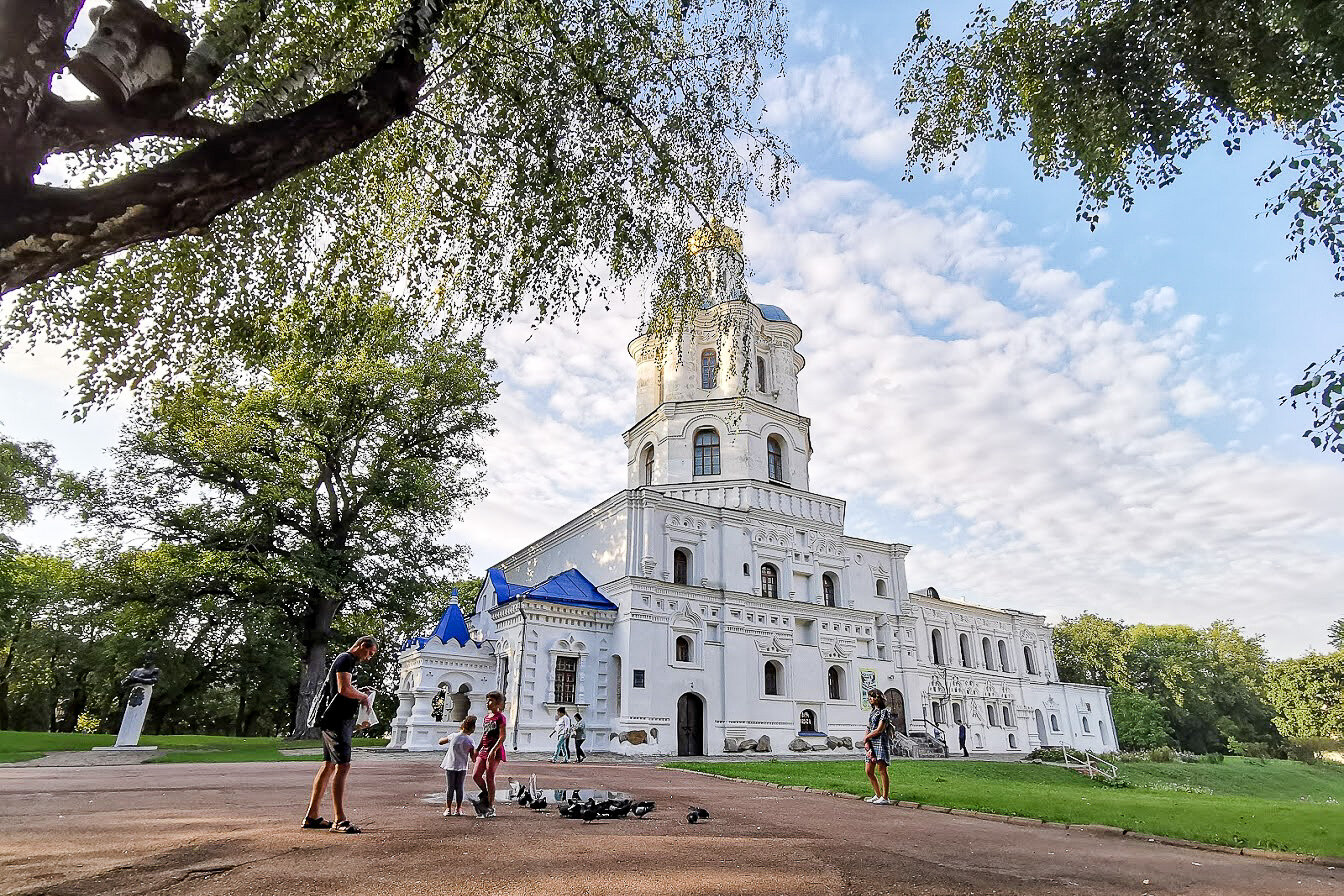 People stand in front of Chernihiv’s collegium on Sept. 5, 2020. The building was established in the 18th century but is now used to exhibit icons and ancient artifacts.
Photo by Liza SemkoPrev014Next

Many buildings no longer serve their initial functions. In the collegium, where students studied three centuries ago, now there are exhibitions of icons and ancient artifacts. It’s worth attending the exhibition “Chernihiv and Citizens of Chernihiv 100 Years Ago,” where an administrator can turn on a gramophone that is over 100 years old. Close your eyes and let the old recording transport you back to the Chernihiv under the Russian Empire.

Currently, the archbishop’s house hosts an archive of historical documents.

Throughout the 17th to 20th centuries, Lyzogub’s residence changed hands at least five times. First, it belonged to Colonel Yakiv Lyzogub and then to Hetman Ivan Mazepa. The latter one was a military leader of the Zaporozhian Sich, the military and administrative center of the Cossacks. After Lyzogub’s death, his widow sold the residence to Mazepa, but historians say that he hadn’t lived there.

After that, during different times between the 18th and 21st centuries, the building was used as the regimental chancellery, an archive and, now, it is a warehouse for artifacts from Vasyl Tarnovsky Chernihiv Oblast Historical Museum.

However, the main landmark of the city is the composition of 12 cannons on a hill. Don’t believe those who say that there are 13 cannons – this is a legend for tourists. In local folklore, if a girl agrees on a date with a boy near the 13th cannon, it means that she doesn’t want to date him, since it doesn’t exist.

There is no single explanation of where these cannons came from. Some say that Russian Tsar Peter the Great gave them as a gift to cossacks in honor of their courage in the Great Northern War. Others suggest that some of the cannons came from the bastions of the Chernihiv fortress and the rest came from Kyiv.

One can walk from St. Catherine’s Church to Krasna (“Beautiful” in old Ukrainian) Square, which then leads to the Alley of Heroes and its three fountains. During the weekends, city residents and tourists gather together in this place, especially during the summer, when the festival Zelena Stsena (Green Stage) is held here.

Event organizers invite singers and experts to give concerts and lectures, while craftspeople and artists sell their work. During the nights, guests enjoy outdoor cinema screenings.

Krasna Square offers a panoramic view on the Taras Shevchenko Drama Theater, Court of Appeals of Chernihiv Oblast, the Oblast State Administration building and a working pharmacy that is also a pharmacy museum. 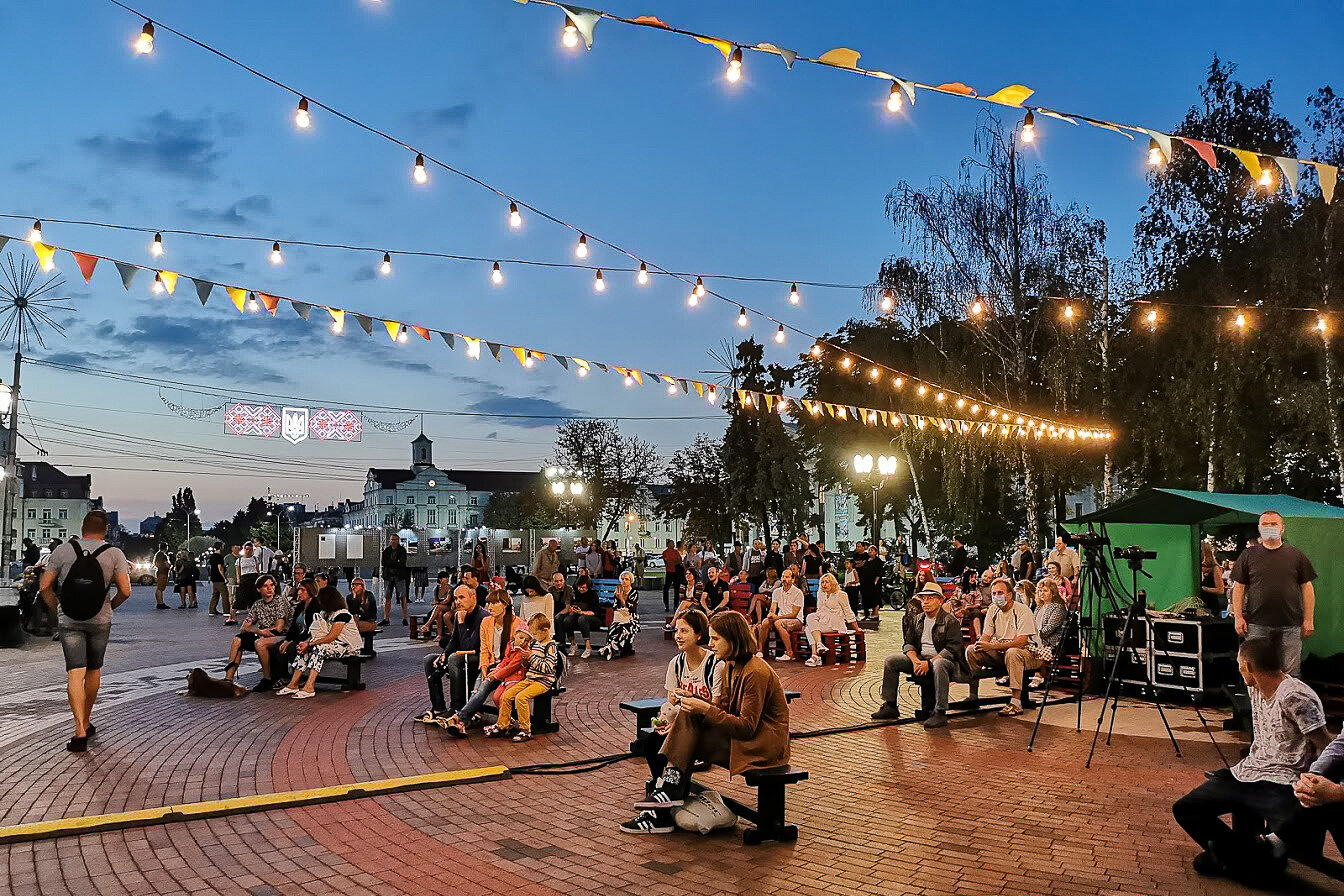 Spectators listen to music at Chernihiv’s Zelena Scena (Green Stage) festival that is held during the summers on Sept. 5, 2020.
Photo by Liza Semko 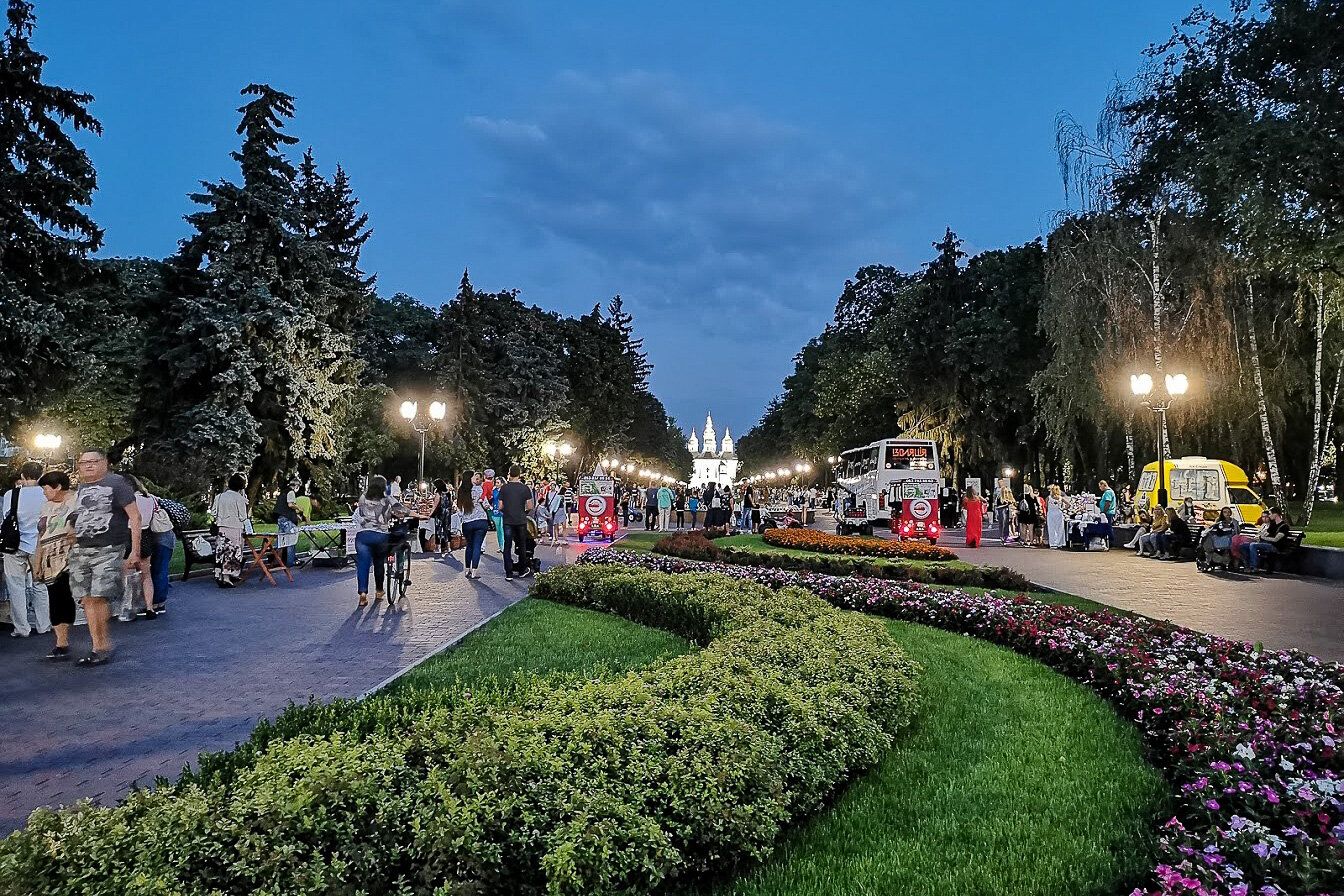 People stroll around the Alley of Heroes during the Zelena Scena (Green Stage) festival in Chernihiv on Sept. 5, 2020.
Photo by Liza Semko 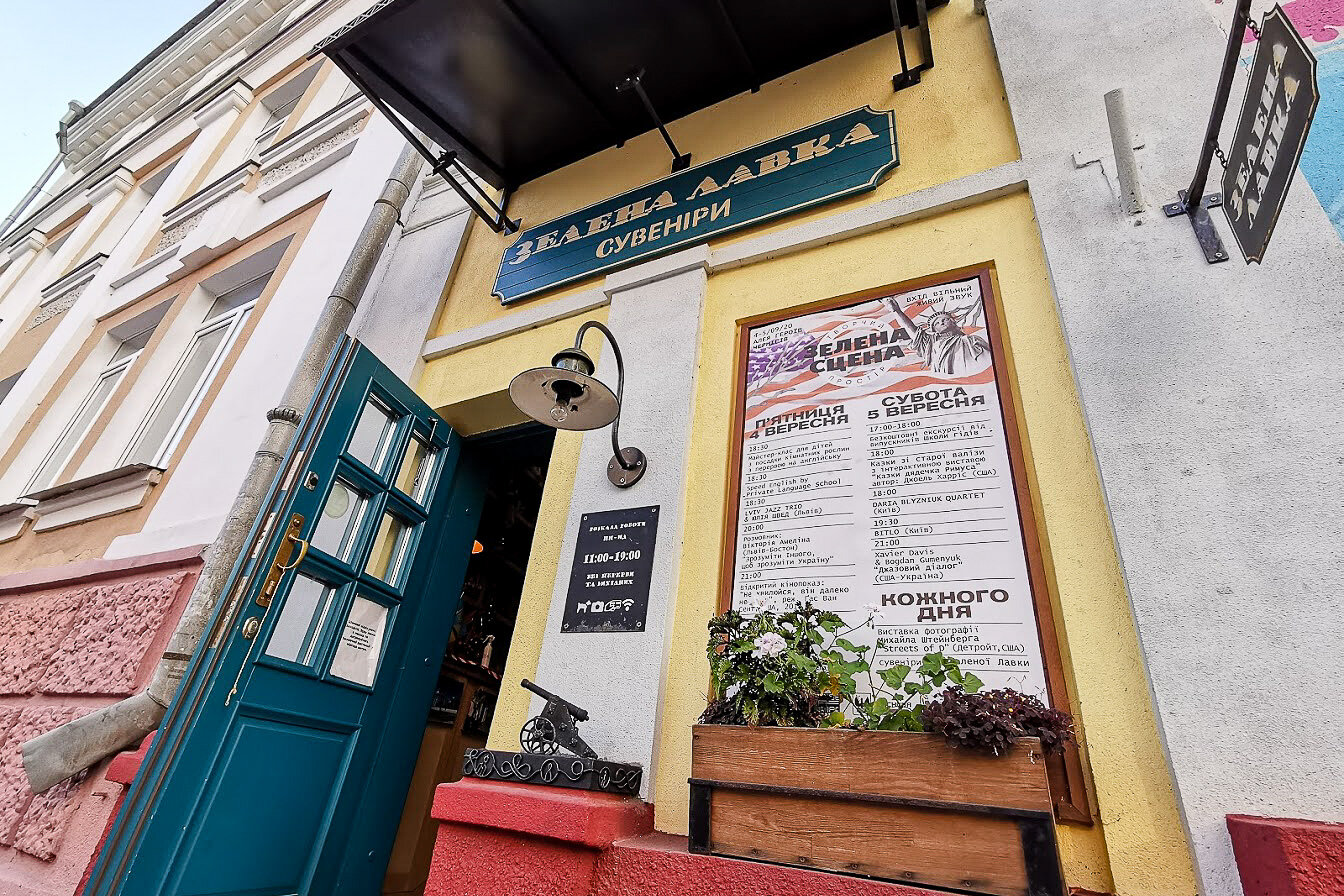 Chernihiv’s Zelena Lavka is a shop where tourists can buy souvenirs. A miniature version of the legendary 13th cannon stands on the facade of the shop on Sept. 5, 2020.
Photo by Liza Semko 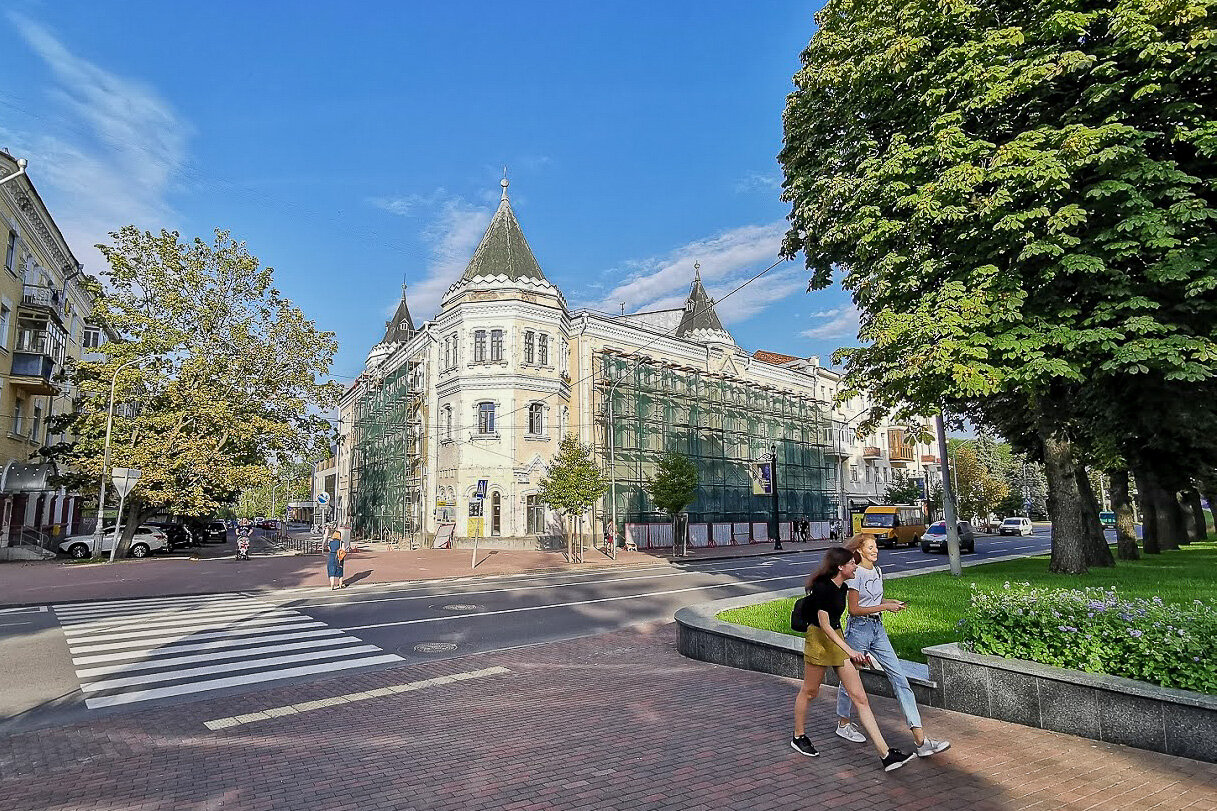 People pass by Chernihiv’s philharmonic building on Sept. 5, 2020. It was constructed at the beginning of the 20th century and is located near the Alley of Heroes.
Photo by Liza Semko

A view from the Alley of Heroes of Krasna Square, Taras Shevchenko Drama Theater (R) and Court of Appeal of Chernihiv Oblast (L) on Sept. 5, 2020.
Photo by Liza Semko 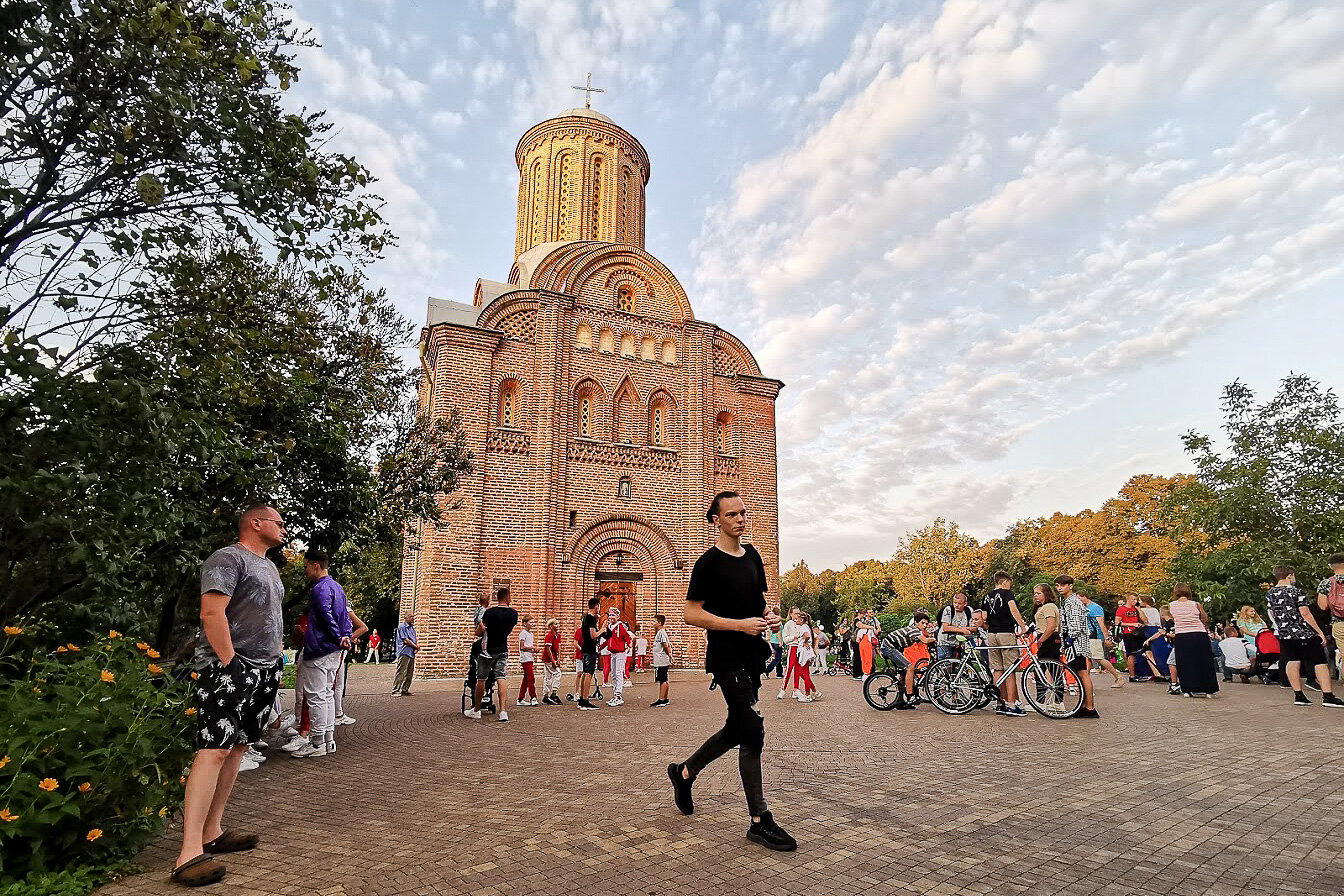 A boy walks in front of Pyatnytska Church on Sept. 5, 2020. The church was completed during the beginning of the 13th century. It is well-known due to its non-ordinary multistage composition.
Photo by Liza SemkoPrev016Next

Beyond the theater stands another prominent sight, Pyatnytska Church, which is well-known due to its unusual multistage composition.

Krasna Square is also the beginning of the so-called “100-meter path,” a park lined with historic buildings.

Farther along, it continues with another park, starting from a hotel and leading to a large shopping mall and a new skate-park where many young people hang out.

The motto of Chernihiv is “City of Legends,” as almost each site has its own legend.

Another main attraction in Chernihiv is the Boldyni mountains, where there are St. Illya’s Church, Anthony’s Caves and numerous kurgan burial mounds. According to a legend, the tunnel from Anthony’s Caves leads to the Kyiv Pechersk Lavra — an Orthodox cave monastery — but historians have debunked this claim.

According to another legend, Chernihiv was named after Prince Chornyi, who was buried in the kurgan grave near Boldyni mountains.

In this area, one can get a great view of the whole city from the bell tower of the Trinity Cathedral. 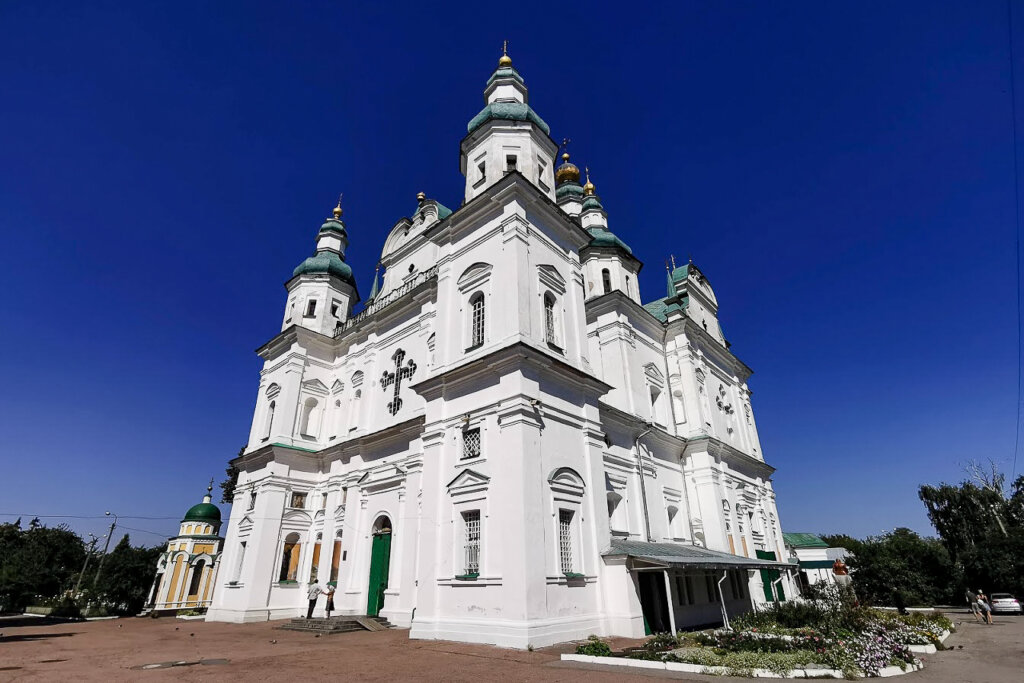 Chernihiv’s St. Trinity Cathedral was built at the end of the 17th century. There is a bell tower next to it from which one can see the whole city. (Liza Semko)

To get to know the history of Chernihiv better, it’s worth seeking out professional guides. For instance, Ervin Miden, who arranges both free and paid excursions, has grown quite famous locally for his dynamic and theatrical tours of the city with a focus on the Lyzogub dynasty. Additionally, it’s possible to order a tour in English, German, Russian or Ukrainian.

Apart from churches and cathedrals, Chernihiv is also known for wooden carvings on some of its buildings.

In 2018, IT designer Stanislav Ivashchenko created a website where he collects images of “wooden lace” in Chernihiv and the surrounding oblast. As of now, there are 284 photos of the wooden building decorations. 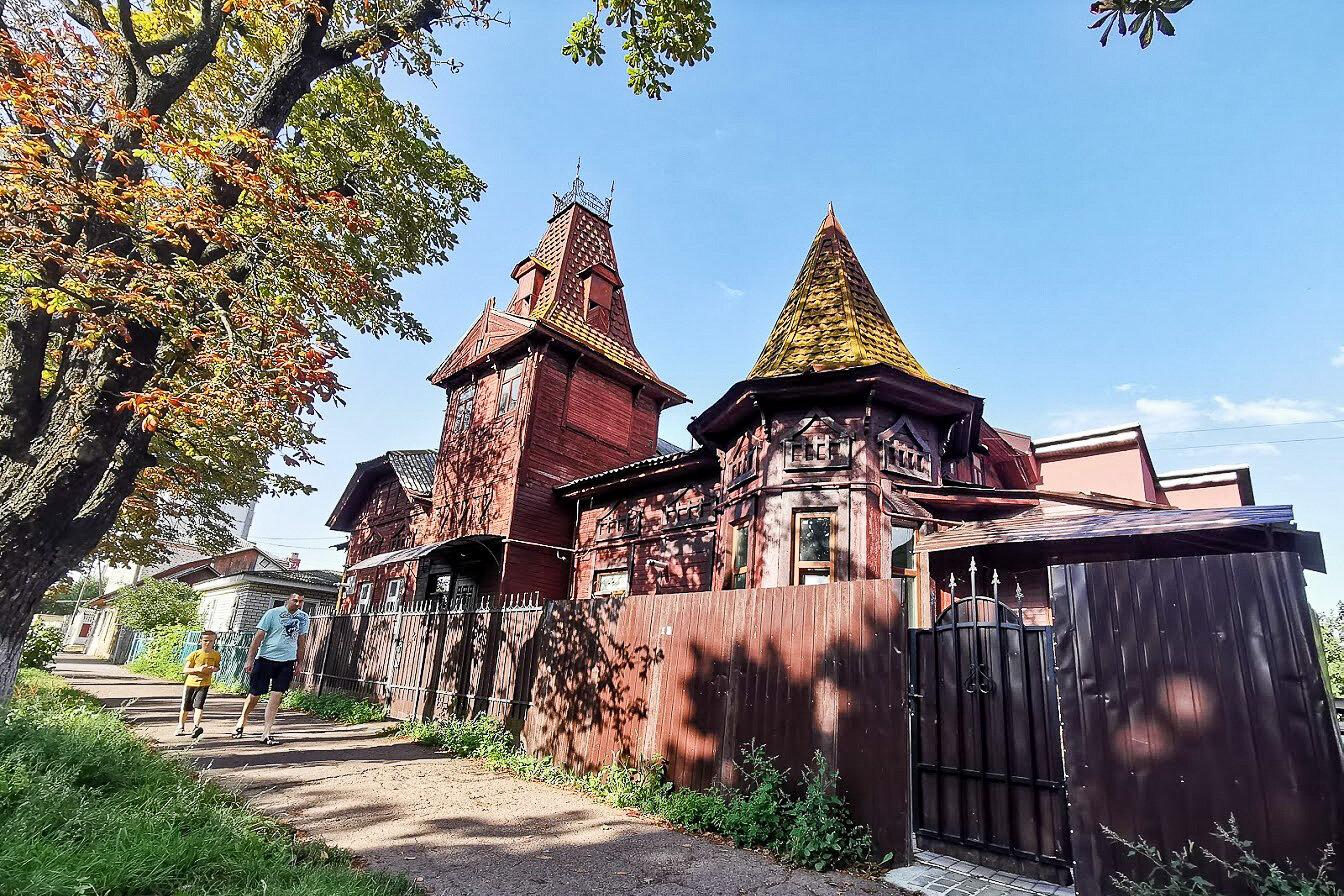 Chernihiv’s picturesque wooden mansion was built at the beginning of the 20th century.
Photo by Liza Semko 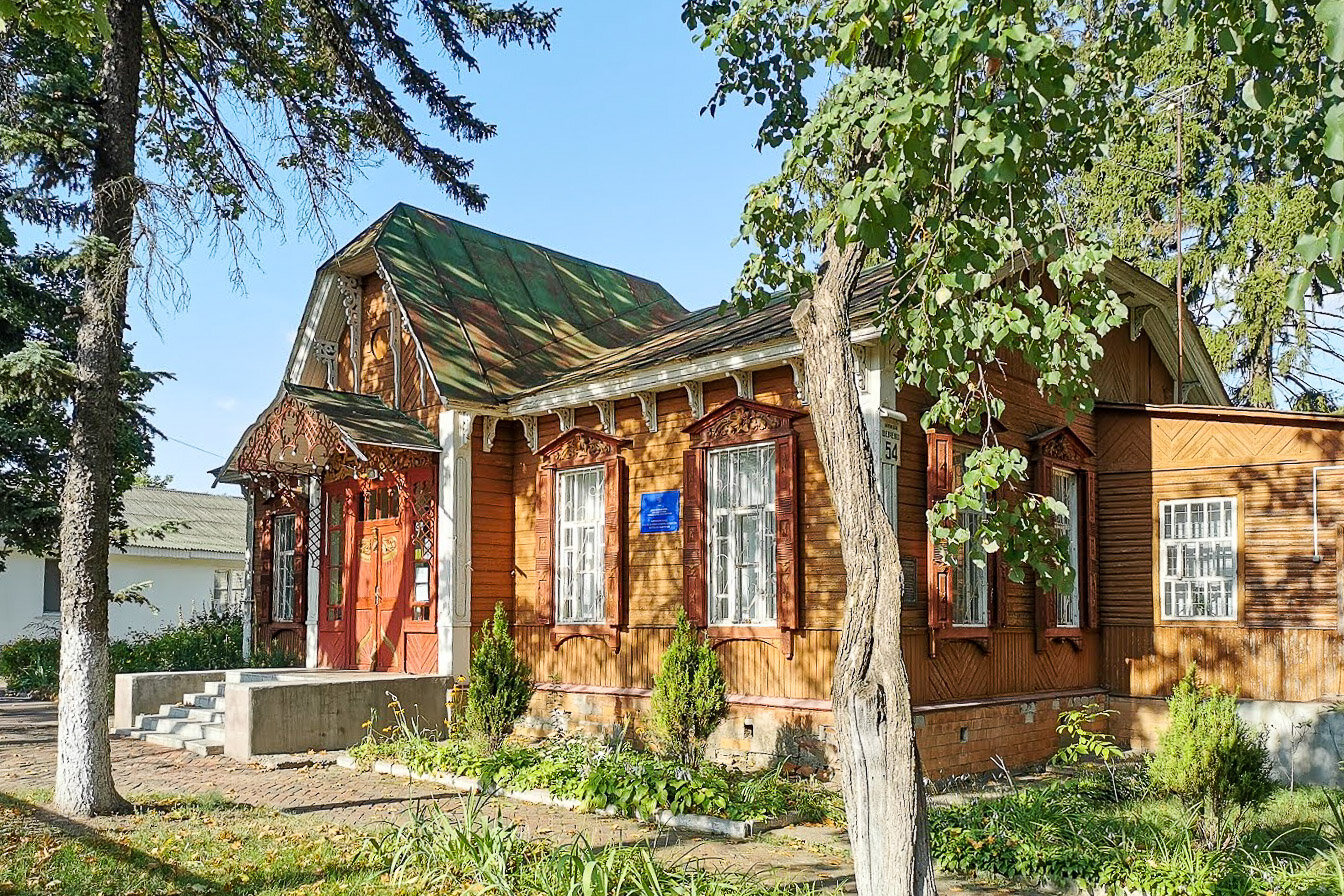 Chernihiv’s manor house with wooden carvings was built during the end of the 19th century. Today it is under the ownership of the Chernihiv Oblast Library for Youth.
Photo by Liza SemkoPrev012Next

It’s possible to select one of the five routes on the website and, following them, stroll around the city to observe the wooden carvings.

Pay attention to the wooden mansions at 9 Academician Pavlov St. — it has two towers like a castle — and at 39 Kotsyubynskoho St.

Besides architecture, many tourists come to Chernihiv for the city’s restaurants. It’s impossible to leave the city starving. The highest concentration of cafes, restaurants and bars is located between two streets – the part of Myru Avenue that spreads out from Krasna Square to Val and Serozhnikova Street. The undeniable advantage of Chernihiv eateries are their affordable prices, which start from just Hr 100-150 for a lunch meal ($3.60-$5.50).

There are both family-friendly restaurants and places where friends can party. Moreover, local restaurants offer a wide range of dishes from different national cuisines. For example, one can taste Georgian cuisine at Buba, Italian food at Pasta Basta, and Ukrainian at Baluvana Galya. It’s also worth visiting the pastry cafe Aktsent to try its mousse desserts or gelato shop Gelateria Sandro, which has handmade ice-cream with diverse flavors like cocktail drinks, bubble gum and various fruits.

Obviously, the choice of restaurants and cafes isn’t limited to these two streets. As for meat dishes, it’s better to visit the Senator Grill House (1 Magistratska St.) or restaurant Hryak (12 Kyivska St.). To taste Eastern sweets, one should go to Chaikhana Kover (Teahouse Rug) located at 5 St. Pyatnytska. Cafe Tsapa (53 Kotsiubynskogo St.) is the best option for breakfasts and for those diners who love steampunk.

However, if one is bored with fashionable restaurants, he or she should go to Bazis, the oldest network of pizzerias in Chernihiv. Although the company was registered in 1994, the first pizzas were made in 1987 during the Soviet era.

A small Margarita pizza with tomatoes and cheese here costs just Hr 18 ($0.65). However, it seems that the network is stuck in the Soviet-era, and this pizza has nothing in common with its Italian counterparts. It more resembles an oily flatbread with stuffing. Nevertheless, there is always a line of people near Bazis. People walk across Chernihiv’s Myru Avenue on Sept. 5, 2020. The street has the highest concentration of cafes, restaurants and bars in the city.
Photo by Liza Semko A cashier sells Soviet-style pizzas at Bazis, the oldest network of pizzerias in Chernihiv, on Sept. 5, 2020.
Photo by Liza SemkoPrev013Next

Many tourists also come to Chernihiv to drink the local beer. Though almost every Ukrainian knows about the Chernihivske beer brand, it’s worth sticking to the craft beer made in Chernihiv since 2013 at the Bierwelle brewery. Now, the brewery has over 20 main and 10 seasonal types of beer.

It’s possible to buy the craft beer in dozens of factory shops around Chernihiv or order a glass of beer in Gastropub Robata in the city center, Buddka Bar or restaurant Hryak.