Potentially Rigged Elections in Belarus: What Did You Expect?

For the second day now, protestors in Belarus’ capital Minsk have clashed with authorities after incumbent President Alexander Lukashenko “won” his sixth term in a landslide victory.

Belarus has long been considered a puppet state of the Russian Federation, but as recently as June, their government has accused Russia of meddling in Belarus’ electoral process.

Experts even predicted questionable election results in Belarus, but the future of the last dictatorship in Europe currently is uncertain.

In Belarus, rising political star Svetlana Tikhanovskaya gathered her supporters behind the color white during the election.

Aside from a colored rallying cry, both opposition movements assembled behind a strong, pro-Western female candidate. In Ukraine, Yulia Tymoshenko was a hero of the Orange Revolution.

In Belarus, Tikhanovskaya, the wife of a jailed political journalist and blogger, only registered to run for the presidency after her husband was blocked from candidacy and arrested.

Her candidacy was so controversial that she sent her children abroad for safety reasons and went into hiding before the government opened the polls.

Both Tymoshenko and Tikhanovskaya are the respective face of change for their homelands. However, with just 15 years separating the Orange Revolution and what’s happening in Belarus, we should ask ourselves: what did we expect?

Belarusian politics are notoriously brutal and contentious. For example, before Tikhanovskaya was the primary opposition candidate, Lukashenko’s government arrested both the primary candidate and his son for aiding in a campaign against Lukashenko.

Ironically, even after Lukashenko mocked women as unfit to be in political power, he was opposed by a trio of strong-willed female leaders. 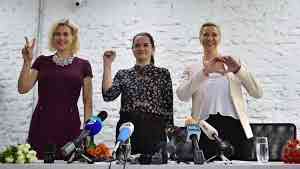 These strong women were not Lukashenko’s only concern. In connection with the election, Lukashenko arrested and jailed 33 Russian mercenaries seeking to project Russian power and execute Russia’s political agenda inside of Belarus.

For years, Russian President Vladimir Putin has supposedly been incensed by Lukashenko’s ability to pit Russia against the West with Belarus squarely in the middle as a ploy for aide or favor or both.

While the media has revealed little proof or documentation detailing Russia’s involvement in these elections, increased upheaval in Eastern Europe is part of Russia’s main strategy in the region.

Russia’s grand strategy seeks destabilization in Eastern Europe and Central Asia and the adoption of a multipolar new world order.

Through both traditional and non-traditional (or illegal) political engagement, Putin is pushing increased Russian influence globally through regional engagement.

The goal of Putin’s involvement in these elections is no different. The mere perception of Russian meddling and subsequent ballot stuffing in Belarus do enough to alter Eastern Europe’s political landscape. If it isn’t happening in Georgia or Ukraine, it has to be happening somewhere else within Russian purview. As far as western intervention goes, there is little the EU, US, or NATO can do to stop this interference.

Russia is an enduring great power. Even in light of its struggling economy, population crisis, and political idiosyncrasies, it remains a major player on the world stage.

If Putin would go so far as to essentially fire his own government to enable a longer term as executive head of the Russian Federation, using a realist lens, we should come to expect the kind of meddling and backlash that is unfolding in Belarus.

Belarus is hardly a modern nation-state or rising democratic power. For years, it has been an economic and democratic laggard in Eastern Europe, even when compared to struggling countries like Georgia, Armenia, and Azerbaijan.

However, one thing is certain moving forward: the eventual results of this election might be significantly different for Lukashenko.

Lukashenko now walks the fine line between populism and revolution. It would not be surprising to hear of an eventual overthrow of the current regime, similar to the 2014 ousting of Victor Yanukovych in Ukraine.

The main difference here is that Belarus has traditionally aligned itself close enough to Russia as to not draw into question its relationship with the West.

On the other hand, Russian involvement in Belarus may have left Lukashenko no choice but to rig the elections in his favor, further destabilizing his “democracy” and Eastern Europe.

If Lukashenko is exiled, it creates another power vacuum in Russia’s backyard. If his regime survives, it lives on with a black mark in its history.

The situation in Minsk is not pretty. Dozens of Belarusian citizens will likely die in vain in the name of democratic protests against an anti-democratic government.

Unfortunately for Belarus, even if this outcome was predictable, there was little anyone could have done about it short of political or military conflict. Political analysts and pundits alike need to start asking themselves: what did we expect, and what can be done to prevent this next time?