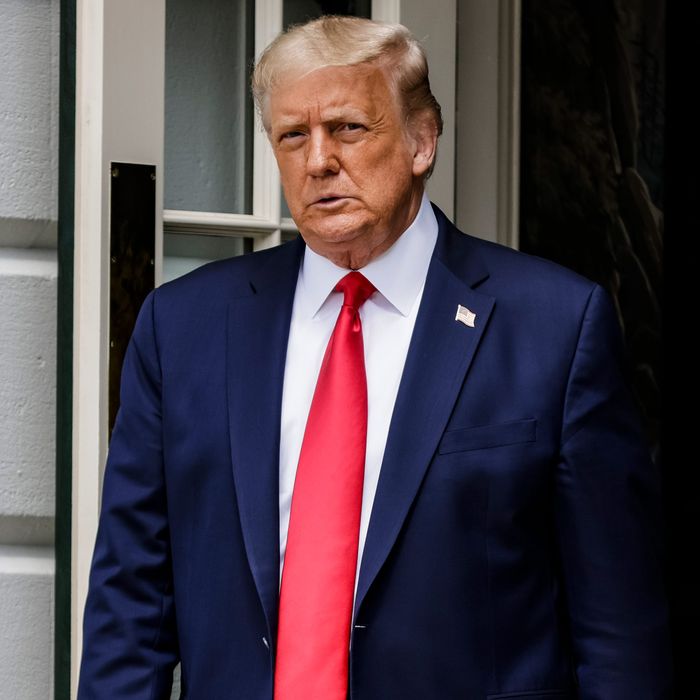 Two weeks ago, William Evanina, director of the United States National Counterintelligence and Security Center, published a somewhat vague warning about various forms of foreign interference in the upcoming election. On Friday, he followed up with a more direct and incriminating one, specifically warning that Russia is working to help reelect Donald Trump. Even more important is what this warning unmistakably implies: that Trump and his Republican allies in Congress are actively cooperating with Russia’s campaign.

Trump obviously tends to respond with rage at the suggestion that Russia wants him to win, let alone that he is accepting the assistance. So Evanina’s summary delicately surrounds the revelations about Trump and Moscow with superficially balancing material. The report highlights three countries that want to influence the election: Russia, China, and Iran. The report notes that the latter two want Trump to lose, while Russia wants him to win.

This seems intended to let Republicans claim that there is foreign interference on both sides. And it’s true, as far as it goes.

But the comparisons end there. What is China doing to defeat Trump? Its government has “grown increasingly critical of the current Administration’s COVID-19 response, closure of China’s Houston Consulate, and actions on other issues.” And Iran’s efforts “probably will focus on on-line influence, such as spreading disinformation on social media and recirculating anti-U.S. content.”

In others words, Iran and China are undermining Trump by criticizing him in public remarks, possibly including some mean tweets.

Russia’s efforts to help Trump include all that. In addition, the statement notes, “pro-Russia Ukrainian parliamentarian Andriy Derkach is spreading claims about corruption — including through publicizing leaked phone calls — to undermine former Vice President Biden’s candidacy and the Democratic Party.”

Derkach and his Russian allies despise Biden, who spearheaded the administration’s efforts to reform Ukraine, rein in its oligarchs, and diminish Russian influence. They have attempted to depict Biden’s reform efforts as a corrupt plot to enrich his son Hunter.

Derkach has been working openly with Trump’s lawyer, Rudy Giuliani. None of this is a secret. Here are the two of them meeting in Kiev in December:

Rudy just met in #Ukraine with former pro-#Russia MP Andriy Derkach just days ahead of peace talks between #Ukraine’s President Zelensky and Putin🇷🇺.#Ukraine’s president learned of Rudy’s arrival FROM THE MEDIA. “Equally shocked by his arrival was the US embassy.”😳 pic.twitter.com/rbmEFJ7KGk— Dr. Dena Grayson (@DrDenaGrayson) December 5, 2019

Giuliani told the Washington Post earlier this summer that Derkach “doesn’t seem pro-Russian to me.” In case that ruse was fooling anybody, U.S. intelligence has now officially described Derkach as an organ of Russian political interference.

Meanwhile, Senate Republicans on the Homeland Security Committee are holding hearings in an attempt to substantiate this charge — or, more realistically, to insinuate it. They have produced no evidence to advance their charge. The Russians have given Republicans stolen tapes of secret conversations Biden held with Ukrainians during his tenure as vice-president, and pro-Trump media outlets have hyped up the material, but nothing they have is inconsistent with the narrative that mainstream news organizations found. Biden was working to clean up Ukraine.

Senate Republicans tried to be cagey about their activities. After pro-Russian Ukrainians said they’d passed materials on to Republican officials, a Johnson staffer told NBC News in July that it was “‘false’ the committee has received any ‘oppo,’ or opposition research, without responding directly to whether that covers any materials from foreign sources.”

The Washington Post reported that Homeland Security Committee chairman Ron Johnson received secret documents from Ukrainians. And former Giuliani associate Lev Parnas has confessed to putting Devin Nunes, the top Republican on the House Intelligence Committee and perhaps Trump’s most energetic defender on all things Russia, in touch with one of the Ukrainians releasing documents in the United States.

There is hardly any secret to what they’re up to. Johnson says he plans to release his report on Biden in September. It hardly matters if the information Russia gives him actually substantiates his allegations, or even whether it is authentic. The obvious plan is to splash some headlines into news screens in the heat of the campaign that seem to connect Biden to some kind of wrongdoing.

What makes Evanina’s statement on Friday so significant is that it makes clear that the passing of information, real or otherwise, from various Ukrainian figures to various Trump allies is part of a Russian-directed scheme to help Trump win. Republicans could tell Russia that Russian-controlled media are free to say anything they want, but Republicans aren’t going to launder their propaganda for them. Instead, they are doing everything in their power to exploit it.

Draper’s story also helps contextualize the essentially decorative mentions of China and Iran. Intelligence officials are terrified of enraging Trump by confirming that Russia wants him to win, even though the conclusion is obvious. If you want to understand why officials added references to China and Iran to create the illusion of balance — even though those two countries don’t seem to be taking any steps to help Biden, and Biden certainly isn’t cooperating with them — Draper’s narrative explains the intense pressure they’re facing.