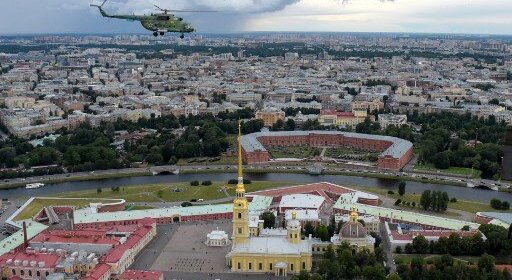 There is a school of political thought in the United States and Europe which proposes that Vladimir Putin’s aggressive stance against the West is the fault of the West itself.

The story goes that Americans in particular somehow mismanaged Russia’s transition to democracy after the collapse of the Soviet Union. Leaving the economic component aside — although there is also a theory blaming US advice to Russia on how to shift from the planned economy to the market for a series of economic crises after the fall of communism — the argument focuses on the eastward expansion of NATO.

The Atlantic alliance, the reasoning goes, should have presented a friendly face to Moscow and go out of its way to show that it had reformed itself away from the Cold War strategy of containing Russia. Instead, first, the former German Democratic Republic became a NATO member having been incorporated into the Federal Republic, then the former Warsaw Pact member states and finally the three former Soviet republics along the Baltic — the latter step bringing Western armies to the immediate proximity of St. Petersburg, Putin’s native city.

In this version, Russia felt betrayed, and the historic memory of various invasions from the West, by the Poles and Lithuanians, the French and the Germans, made Putin distrust the West’s intentions. Accordingly, he felt betrayed and disillusioned with the whole democratization process, tightening the screws at home and seeking to secure Russian borders by the traditional means that Russia always uses — by invading and annexing neighboring territories.

The conclusion is therefore that the West should now allay Russia’s fears by showing its peaceful intentions — which is when constructive dialogue could perhaps resume.

We don’t know the extent and the exact nature of Donald Trump’s connection to Russia and the Republicans in Congress quashed a serious investigation. The charitable view is that Trump adheres to the theory blaming the West for Putin’s aggressive behavior and that is why he goes out of his way to flatter Putin and invite Russia back to the Group of Seven leading industrial nations.

In turn, the charitable view of Russia’s support for Trump in the 2016 election, and the illegal interference on his behalf, is that it was motivated by the fact that Hillary Clinton represented the traditional, hawkish brand of US foreign policy. Indeed, has she been in the White House these past three and a half years, Putin would have paid a far steeper price for his war crimes in Ukraine.

But Trump’s own experience in dealing with Russia shows that accommodation with Moscow brings none of the desired results.

Trump has never really criticized Putin, kept the issue of Crimea and eastern Ukraine very much on the back burner of US foreign policy — even hinting at a possible recognition of Russian sovereignty over Crimea — and has worked steadily to undermine the Western alliance of which he’s still a nominal leader.

In return, Putin has shown no inclination to become less aggressive in Ukraine or any less hostile toward the West.

Putin’s Russia is surely unhappy about the eastward expansion of NATO but it is not the reason for the way Putin’s regime has turned out. Rather, the other way around. The communist elites of the late Soviet era were immoral kleptocrats. Putin was no exception, having started his career of graft and corruption back in St.Petersburg. Having been appointed Russia’s President by Boris Yeltsin he came to rely on his former colleagues in the KGB, as well as the ex-communist elites, to maintain his power. That meant allowing them to steal with impunity. As a result, he has turned post-communist into a massive, mind-boggling kleptocracy.

Naturally, a kleptocracy and a true democracy are incompatible, which is why the weak and underdeveloped democratic institutions of the 1990s were all dismantled by the Putin regime after 2000.

Meanwhile, autocratic rulers can only govern under populist slogans and rely on the dumbest and the least educated groups in society. And of course patriotism — or what qualifies as patriotism under such regimes — is the last refuge of a scoundrel.

As Putin would have been hostile to the West and aggressive toward former Soviet states in any case, not expanding NATO to cover all its current members would have invited constant provocations against them, starting with the Baltic nations.

Trump’s appeasement of Putin — and possibly even coordination of policy, since the White House refuses to release much information about the two leaders’ telephone conversations — are not making Russia any less aggressive in Ukraine and may possibly encourage it to make further aggressive moves there ahead of the US elections in November, which Trump may very well lose.

In fact, an even more decisive expansion of NATO, taking advantage of pro-Western governments in countries such as Ukraine and Georgia (and if the situation changes in Belarus, as well) would greatly curb Putin’s lebensraum for military misadventures.