In Ukraine, state companies are hotbeds of corruption. One oligarch is especially talented in milking them.

Since July 2019, oligarch Ihor Kolomoisky has allegedly gained millions of dollars through the resale of natural gas from the state-owned Ukrnafta oil company to the state-owned Centrenergo energy company.

Both companies have allegedly been under the oligarch’s influence.

But while the State Property Fund replaced Centrenergo’s management in late May, supposedly ending Kolomoisky’s influence on the company, one recent development suggests that the oligarch has grown stronger at Ukrnafta.

For nearly a year, Ukrnafta’s supervisory board was searching for a new CEO.

The idea was to find an independent professional whose arrival would signal a new start for the troubled company, which for years was controlled and milked by its minority shareholder, oligarch Kolomoisky.

In May, the selection reached its final stage. A short list of candidates was presented to the board, and interviews started. The era of Kolomoisky’s control over Ukrnafta was about to end.

Then, it all came to a sudden halt.

On May 20, Ukrnafta’s supervisory board voted to terminate the competition and appoint the acting CEO of Ukrnafta, Oleg Gez, to the job.

Five members of the board, all nominated by the oligarch’s companies, supported the decision to cancel the independent selection and appoint Gez.

But they would have failed if not for one board member nominated by Naftogaz, the state company with the majority stake in Ukrnafta, who provided the decisive vote.

The official reason to cancel the selection was the economic downturn caused by the ongoing COVID-19 pandemic. Eight days later, Naftogaz made a public statement alleging that the competition for a new CEO was poorly executed.

Andriy Boytsun, a member of the company’s supervisory board who led the committee overseeing the selection process, disputes this account. He was frustrated when the competition was canceled.

“95% of the job was already done,” Boytsun told the Kyiv Post.

“I’m like a football player who scored a goal, but my team isn’t cheering,” says Boytsun. “Maybe someone is betting on the result?”

Due to Ukrnafta’s history of corruption and oligarchic control, the abrupt end to the effort to install an independent CEO aroused suspicions.

They grew when it emerged that Kolomoisky was still profiteering from Ukrnafta with Gez as acting CEO. Gez has led the company since May 2019.

Days after Ukrnafta’s board voted for the new CEO, an investigation by Radio Free Europe/Radio Liberty found that a company called United Energy, linked to Kolomoisky, was reselling gas from Ukrnafta to Centrenergo with a 50% margin. The company has resold at least Hr 103 million ($4 million) worth of gas to Centrenergo since Jan. 1, making at least $1 million.

A month after the search for a new CEO was canceled, Ukrnafta was once again accused of benefiting Kolomoisky. On June 17, Ukrnafta sold 260,000 tons of oil to companies of Kolomoisky’s Privat Group at a rate of $18 a barrel.

On that same day, the price of Brent crude oil was $40 a barrel.

Sergey Kuyun, director at A-95 consulting, told the Kyiv Post that Kolomoisky had sold oil to himself, costing the state at least $49 million in one day.

“Gez is fully controlled by the Privat Group,” Kuyun says.

Ukrnafta is among Ukraine’s most scandalous state companies.

It is the country’s largest oil producer. In 2019, the company extracted 1.5 million tons of oil, 75% of the country’s total. The company also produced 1.2 billion cubic meters of gas, 6% of Ukraine’s total gas extraction.

Ukrnafta owes Ukraine $500 million worth of unpaid taxes. Some of its property is currently under arrest by the state. But the state has had no real control over the company for over 16 years.

Officially, the company is owned by state-owned oil and gas monopolist Naftogaz, which controls 50% plus one share. However, the company was long accused of being under control of Kolomoisky, whose companies own 42% of Ukrnafta.

Since 2003, Kolomoisky has controlled the company using a legal loophole that required 60 percent of board members to be present at the board meetings for a quorum. This meant that minority shareholders were able to stall any decision of a state-owned company by simply not showing up for a meeting.

According to an agreement between majority and minority shareholders, the head of the board was also chosen by the minority owners — meaning, by Kolomoisky.

The National Anti-Corruption Bureau alleged that, up until 2015, Hr 15 billion ($600 million) were embezzled from the company through shell companies. In March 2015, the parliament voted to lower the board quorum in state-owned companies to 50% plus one share, allowing Naftogaz to reclaim control of its company. 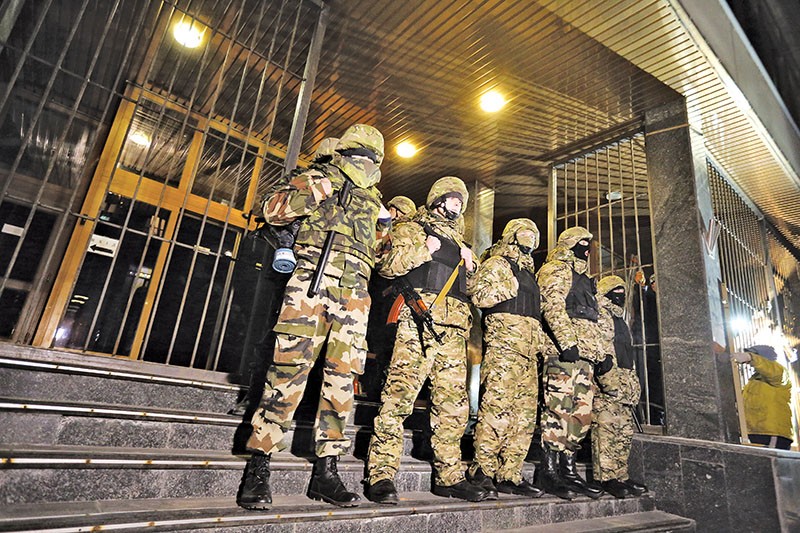 This caused a major rift between Kolomoisky and then-President Petro Poroshenko. Kolomoisky, serving as governor of Dnipropetrovsk Oblast at the time, had gunmen guard Ukrnafta’s main office, blocking state representatives from entering it.

Eventually, the gunmen were disarmed and Kolomoisky was forced to resign from his governor’s post.

In 2020, Ukrnafta was supposed to get a fresh start. The company was to be cleared of all debt and receive a new independent director.

In Ukraine, the state keeps household gas prices below market level. The government promised to pay Naftogaz to cover the difference. In turn, Naftogaz promised to follow a court ruling and pay Ukrnafta Hr 30 billion ($1.2 billion) for the gas it took from the company years ago.

Ukrnafta, in turn, was supposed to cover its tax debts before the state. But this hasn’t happened yet.

Meanwhile, a supervisory board was formed with the right to appoint a new head of the company.

Naftogaz’s Executive Director Vitrenko was supposed to oversee Ukrnafta’s activity, while Boytsun, nominated by Naftogaz as an independent member, was chosen to lead the board’s committee tasked with finding a new head.

The company hired Boyden, an international recruiting agency to pick candidates for the job. Eventually a shortlist of 14 people was created.

Yet, the list had flaws. In an attempt to appease both parties the list was filled with candidates who did not have the best evaluations and also included a candidate who agreed to take part in the application process after the list was formed and was added separately.

These seemingly minor details were used as a reason to scrap the yearlong CEO search.

On May 20, five supervisory board members nominated by the minority shareholders and one board member from Naftogaz voted to appoint acting head Gez as a fulltime head.

Yaroslav Teklyuk, director of Naftogaz’s legal department, was the only majority representative who voted alongside minority owners.

“The appointment committee decided not to listen to the recommendations of experts, but to rely on its own expertise,” wrote Teklyuk on Facebook, defending his decision.

“Naftogaz, either because of some kind of (secret) arrangements or other factors, changed its official position,” says Vitrenko.

Vitrenko has strained relations with the company he represents. Earlier, Naftogaz made clear it will dissolve his post, ending Vitrenko’s 6-year tenure at the company on July 15. 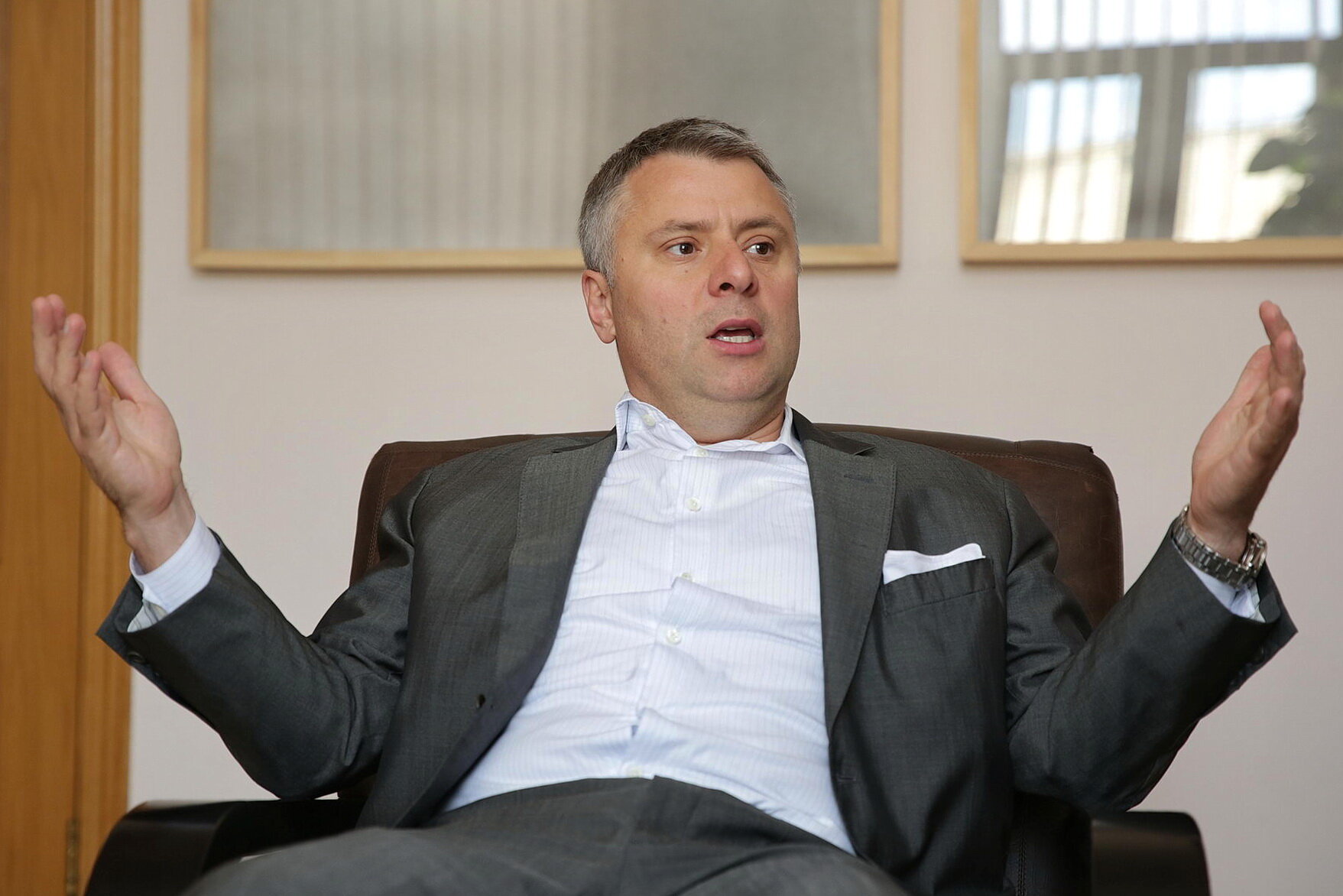 Yuriy Vitrenko, Naftogaz’s executive director, speaks with the Kyiv Post on June 20, 2018, in his office in Kyiv. (Kostyantyn Chernichkin)

Due to his public stance, Naftogaz recalled him from Ukrnafta ahead of time.

Alyona Osmolovska, head of government relations at Naftogaz, says that the board was presented with two options, either to cancel the competition and appoint Gez or to choose from only four candidates, some of whom lacked necessary qualifications.

Osmolovska says that the board had no choice but to appoint Gez.

Boytsun says that the company is lying.

The company denies all accusations.

The problems surrounding Ukrnafta aligned with the scandal in Centrenergo, where the State Property Fund and the former government were actively trying to take back control over an officially state-owned energy company.

On Feb. 26, the government of Prime Minister Oleksiy Honcharuk ruled to sack the management of Centrenergo and to prepare the company for privatization.

“Centrenergo must be ready to be sold,” the prime minister said back in November.

On March 4, Honcharuk was fired by parliament. His decision to change the head of Centrenergo was overturned by the court.

“Oligarchs were the ones who played the biggest role in pushing our Cabinet out, because they couldn’t cut deals with us,” Honcharuk told the Kyiv Post during a recent interview.

Only on May 29, the State Property Fund was able to change the leadership of Centrenergo, removing Volodymyr Potapenko from the helm of the company. He had served in this role since June 2019.

“Today we returned Centrenergo to the control of the state, despite all the resistance,” Dmytro Senychenko, head of the State Property Fund, told the Kyiv Post on May 30.

Yet, Potapenko remained on the company’s board.

On June 4, Schemes published a major investigation tying Potapenko’s leadership to questionable contracts which, according to journalists, benefited oligarch Kolomoisky.

In 2019, Centrenergo bought gas directly from Naftogaz. In January 2020, the state-owned company decided to switch suppliers and started to buy gas from a low-profile company called United Energy.

According to Schemes, between January and May, Centrenergo bought 22.6 million cubic meters of gas from United Energy for a total price of Hr 103 million ($4 million).

The total profits from the sale amounted to over $1 million. According to United Energy’s portfolio, it conducts business activity with companies linked to Kolomoisky. In October, the company began buying Russian electricity for companies owned by Kolomoisky and businessmen brothers Ihor and Hryhoriy Surkis, associates of the oligarch.

Kolomoisky says he doesn’t have a connection to United Energy, nor does he control Centrenergo.

However, an additional investigation by investigative journalism project Bihus.info suggests the latter claim is not true.

According to Bihus.info, over the past year, Kolomoisky has been making money selling coal from Russia to Centrenergo at an inflated price.

Four low-profile energy companies — Synthesis Oil, Nafta Force, Record Systems and Azonex — monopolized supplying coal to Centrenergo. Most of the firms showed no activity prior to 2019.

All were linked to Kolomoisky either through Cyprus-based offshore companies or by sharing a legal address with other companies connected to the oligarch.

In one of the transactions, Synthesis Oil bought Russian coal for $75 (Hr 1,957) per ton and resold it to Centrenergo at $82 (Hr 2,200) per ton. Beginning in July, according to Bihus.info, companies linked to Kolomosiky sold 1.5 million tons of coal to Centrenergo making profits of at least $11 million.

Kolomoisky told the Kyiv Post that he has nothing to do with the scheme, yet that it’s a “well-known fact” that Centrenergo is buying Russian coal.

The Russian coal sales in question began in July 2019, two months after President Volodymyr Zelensky was sworn into office. Zelensky has long been accused of favoring the oligarch, whose television empire supported the president during his campaign.

Now attention has switched back to Ukrnafta, where an independent competition for the CEO position was scrapped and the company’s reputation took another blow.

“It’s yet another affirmation that people in power (in Ukraine) aren’t ready to walk the talk,” says Vitrenko.

“They say that we need a transparent competition, then when the competition is 90% done, they dismantle it and appoint a person without a competition.”