Last year in November, President Volodymyr Zelensky passed a law that gives citizens free access to all coasts of water and forbids any construction within those areas. It came into effect in February 2020. Violating this law results in a fine of up to Hr 6,800 for citizens ($255) and up to Hr 11,900 ($446) for officials. Violating the law for the second time is punishable with a double fine. In addition, installing a fence on the coastal territory is also forbidden. All this is according to the law.

What is happening to Odesa’s coast

The total length of beaches in Odesa, with its 1 million people on the Black Sea 500 kilometers south of Kyiv, is 20 kilometers. Most of it occupied by artificial shore protection structures, associated hydraulic structures, and ports. Only 25% of the coastal territory is reserved for beach vacations.

If you are planning to go to Odesa this summer, be prepared for the fact that you cannot easily get to any beach.  A lot of impudent construction, in violation of all laws, has taken place. It has sharply reduced free access to the coast.

Already 25 years ago, the Water Code was initiated in Ukraine. Throughout all these years, members of the Verkhovna Rada, Ukraine’s parliament, made additions to it.

But the fourth section “water protection” remained unchanged. Article 86 of the Water Code of Ukraine prohibits the construction of any structures within the coastal protective strip (except for hydraulic, navigation, hydrometeorological and linear). Section 88 clarifies the width of the strip for large bodies of water must be at 100 meters. This means, that it’s simply impossible to build on the seashore. Coastal land is under the ownership of the state and the public and can be used only under the terms of this code.

It seems that everything is pretty clear – there’s a law and there are consequences for violating it.

Except this isn’t in Odesa.

This city does not live by the law.

Five years ago, Gennady Trukhanov became the mayor of Odesa. From that moment, according to locals, the point of no return began. Trukhanov’s unwillingness to change his usual way of life — or rather criminal inclinations, plunged the city into complete chaos and lawlessness. Odesa actually began to tear into pieces, threatening the prominent sea coast and the Health Track. For Odesa residents, this is a pedestrian and main sports street – one of the best sights in the city. Transport on it is prohibited, except for technical, emergency, and sightseeing electric vehicles. (Editor’s Note: Odesa Mayor Gennady Trukhanov has a policy of not responding to requests for comment from Channel 7 Odesa.)

At least so it was until recently. 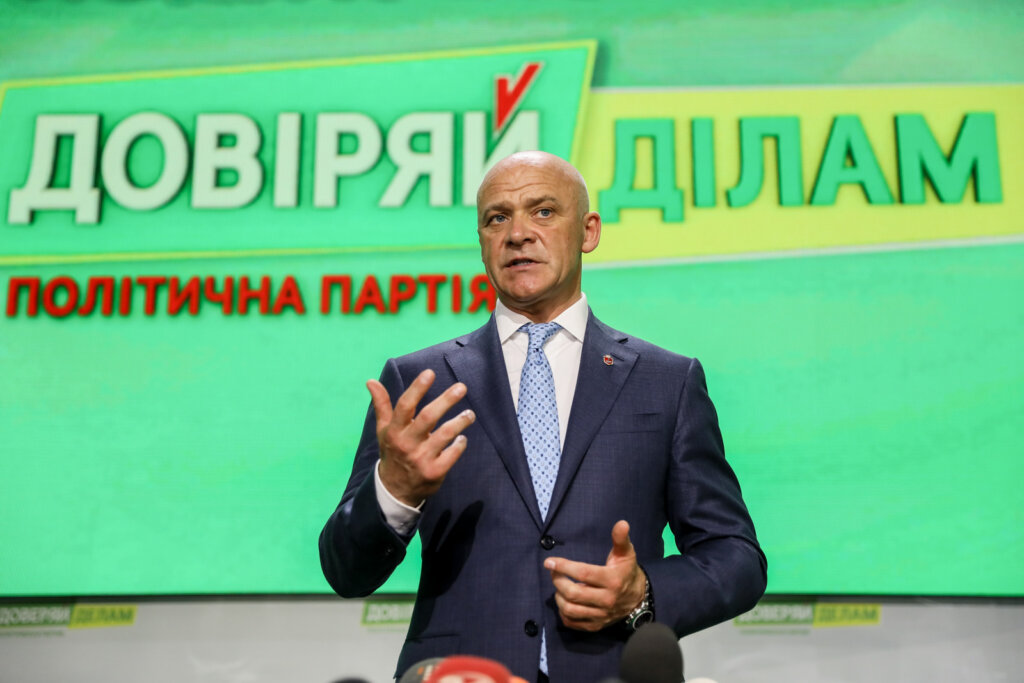 Odesa Mayor Gennady Trukhanov (C) speaks during a congress of their political party, Doveryai Delam (“Trust in Deeds”), in Kharkiv on June 2, 2019. The party won no seats in the July 2019 parliamentary election. (Oleg Petrasiuk)

How it actually is

In September 2018, Odesa City Council permitted Varda Plus LLC to develop a land management and allocation plan for an area of 80 acres at 1/5 French Boulevard. This is the territory of the beach of the former sanatorium.

Six months later, local deputies, headed by Trukhanov, approved this project during a session and granted 68 acres for rent to Varda Plus for 10 years. The land was allegedly allocated for the operation and maintenance of non-residential buildings of the yacht club.

By September 2019, the city department of state architectural and construction control issued a permit for construction work – a yacht club with a rescue station, restrooms, places for sports, a catering establishment, and a boathouse.

But everything changed dramatically within two months, and a visualization appears in the local media, where instead of a yacht club right on the shore, between the health track and the sea, they plan to build a multi-story hotel. It will consist of three blocks: Block “A” is a three-story building with a rooftop pool. Block “B” is a 10-story residential building with parking. Block “C” is 10 four-story private houses with access to a private beach. In this case, the maximum distance from the boundary of the plot to the water edge is approximately 22 meters.

The creator of the project was Megaline company, also known as the designer of the infamous Unity Towers residential complex in Arcadia. It was this company that completed the construction of a 26-story building, protruding into the sea. The object is actually located right next to the territory where instead of a yacht club on the shore they plan to build a multi-story hotel. Access to them will be possible only through the Health Track.

This means that Odesa residents can lose not only the coast and free access to the beaches but also the most environmentally friendly road along the sea; where city residents, young mothers with children enjoy their walks, cyclists ride and athletes go in for training.

With the loss of the Health Track, Odesa loses its life. 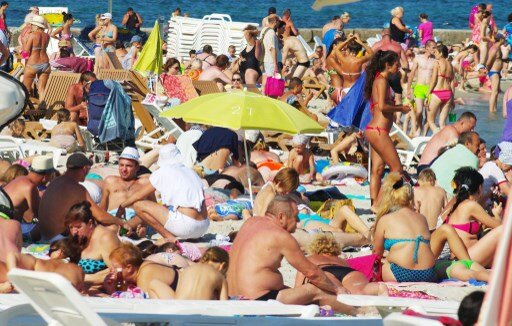 People sunbathe on one of the beaches in southern Ukrainian city of Odesa, on July 20, 2015. (AFP)

Today, the Varda Plus company appears in almost all courts of various instances.

The pre-trial investigation is conducted by the Odesa prosecutor’s office, which believes that the construction area is 20 times more than the area of the initial project.

By the end of February this year, the prosecutor’s office appealed to the court with a request to terminate the lease. The district administrative court banned Varda Plus from carrying out work on the site. However, in March, preparatory work began on the site.

Then the prosecutor’s office of Odesa Oblast handed over the suspicion of non-compliance with the court order to the head of the Varda Plus company.

But this did not stop them.

By June, during the night, the coast began to import heavy equipment and drilling machines. Each attempt is accompanied by skirmishes and brawls of “titushky” (young mercenaries who organize power provocations) by the Varda Plus construction company with activists.

At the same time, Odesa’s police are not taking any measures or fines, neither for violating public order, nor for violating the law, which was personally lobbied by Zelensky.

It turns out that the laws of Ukraine are respected by all citizens, except for officials of the Odesa City Hall, the city administration of the state architectural and construction control, as well as scam builders. Perhaps this is not the law that Ukrainian citizens dream about.