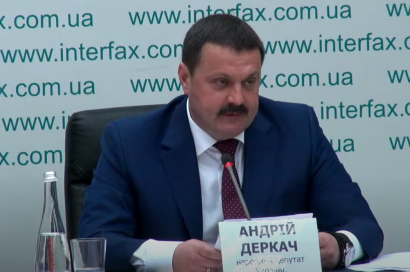 At the press conference in Interfax Ukraine, the Member of the Parliament of Ukraine Andrii Derkach unveiled new records of conversations between people “who appear to be Biden and Poroshenko”.

The main topics of the tapes released by Derkach were the IMF loan guarantees, the operations of Naftogaz, tariff increases, the Burisma case, the nationalization of PrivatBank and others.

According to Derkach, on one of the records, Biden demanded that Poroshenko keep the CEO of Naftogaz NJSC, Kobolyev in place, whom the then Prime Minister Volodymyr Groysman wanted to dismiss. Poroshenko assured Biden that he would deal with this. Commenting on this record, Derkach stated that Kobolyev was backed by the Americans because of joint earnings on the pseudo-reverse of Russian gas when they bought it through Slovakia with a mark-up. According to him, nearly $1.5 billion were stolen from the budget of Ukraine through the gas schemes with the virtual transfer of Russian gas through Slovakia.

After all this, according to Derkach, the task of Petro Poroshenko was to increase the tariffs, otherwise, he would not get the billion.

“As we recall from the previous press conference, Poroshenko brilliantly coped with this task, raising tariffs by 100%, while his overseas bosses asked only for a 75% increase. They took money from the pocket of every Ukrainian. This is not some abstract corruption. This is what concerns everyone, every family!”, the MP emphasized.

On the next record, as Derkach notes, Biden gives Poroshenko a task to personally control Groysman and how he will fulfill the IMF’s requirements (increase gas tariffs for the population).

“Biden bluntly says to Poroshenko: “Make the Prime Minister do what we need, and you will get your billion,” the MP quotes the records.

Derkach also reported about the facts of direct pressure by Biden on other high-ranking officials of Ukraine, in particular, he speaks about control over the actions of the Head of the NBU in the process of re-privatization of PrivatBank.

“There is another interesting detail in this conversation. A character like Oleksandr Onyshchenko who is Poroshenko’s partner in bribing Members of the Parliament and working in the gas market, which posed a direct threat to Poroshenko. Poroshenko also discussed the threat from Onyshchenko with Biden. A defiant fact is an illegal use by Poroshenko of special services of foreign countries to exert pressure on his former accomplice and citizen of Ukraine,” said the MP.

According to Derkach, this is what external governance of the state looks like, multimillion-dollar bribes, censorship, total control over key state bodies: the Verkhovna Rada, the Cabinet of Ministers, the Prosecutor General’s Office, the so-called anti-corruption authorities.

“Intervention in the affairs and operations of private companies, pressure on the media, the involvement of national and foreign special services to resolve personal and corruption issues. Securing political and illegal business interests. This is how international corruption looks like, which has permeated Ukraine to the roots with the help of a curator-Vice President of the United States,” Derkach summed up.

The MP initiated the creation of an anti-corruption platform that will investigate the cases of corruption by senior officials of Ukraine and the United States.

As reported previously, one of the main topics of the press conference on the investigation under the Burisma case, was the statement by the Head of the Group of Prosecutors of the Prosecutor General’s Office of Ukraine for investigating economic crimes of the Yanukovych regime in 2016-2019, Konstantin Kulyk. He claimed that the initial amount of bribe for closing the case against Burisma was $50 million, not $ 6 million.