Youtube has blocked a Russian film about Donetsk airport. A smoke grenade was set on fire near the company’s office in Moscow, and the film was unlocked

Authors:MediaSapiensNow the film is preceded by a warning about “unacceptable and offensive” content. The viewer decides whether to watch it or not.

On May 26, the two-hour documentary “Call Sign Donetsk” by Semyon Pegov was posted on the WarGonzo YouTube channel. Pegov is a blogger, a Russian citizen, who once worked as a journalist for VGTR, then was a military correspondent for LifeNews TV channel in Russian companies in Abkhazia, Syria and Donbas. He is also the author of the book “Me and the Red Separatist” about the militant Arsen Pavlov, better known as Motorola. Earlier, Pegov’s film was shown in abbreviated form on the channel “Russia 24”, and now the authors have posted the full version. Youtube has blocked this content as violating video hosting policies.

On the same day in front of the office of Google, which includes Youtube, an unknown person set fire to a smoke grenade. This news was widely covered in Russian news with headlines like ” Smoke bombs flew into the Google office in Moscow“, While the video shows that the checker was in the package, it was carefully placed before entering the building. The trial was filmed by several people, including Pegov himself, a blogger who called it “an action against the censorship of pro-Western companies in support of the YouTube channels AnnaNews, NewsFront, WarGonzo.” He also stated that he was not involved in the arson of the checkers, and came to film when he learned about the plans of fans of his channel on social networks. The video shows Pegov and an unknown man simultaneously approaching the building where the Google office is located, one of them leaves a package with a checker, and both quickly go along with the building further. Pegov also called on the Russian media to unite in support of these YouTube channels.

Today, Youtube returned Pegov’s video to WarGonzo with a warning that viewers complained about it as “unacceptable and offensive” content. Video hosting did not explain what the unlocking of this video is connected with.

After restoring access to the video, the editor-in-chief of the Russian state TV channel RT Margarita Simonyan spoke in support of the actions of unknown fans AnnaNews, NewsFront, WarGonzo. 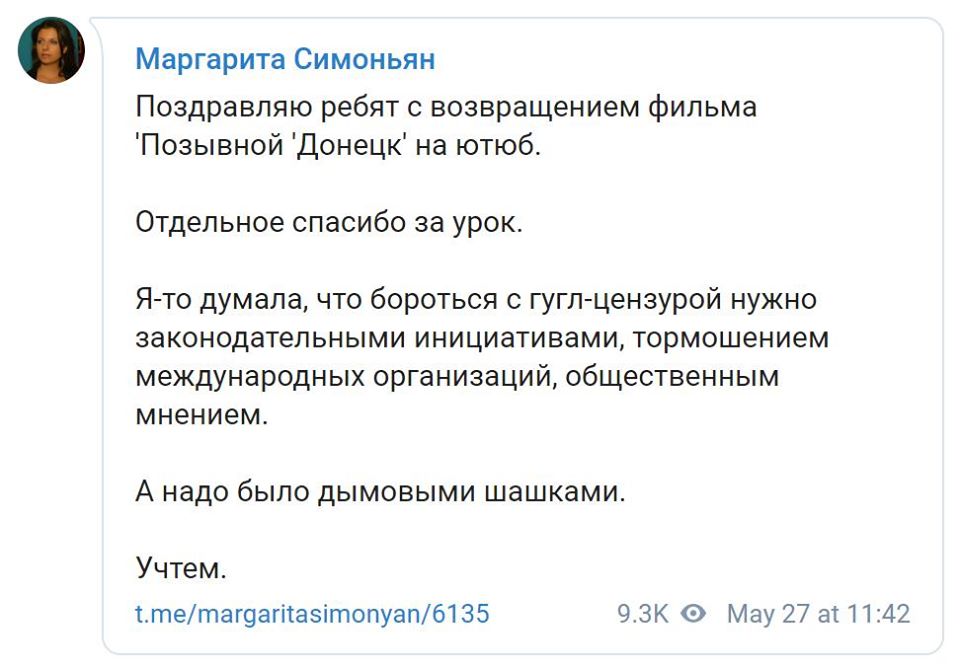 We will remind, earlier Youtube blocked three Russian channels AnnaNews, NewsFront, Crimea 24 because of violation of rules of video hosting.