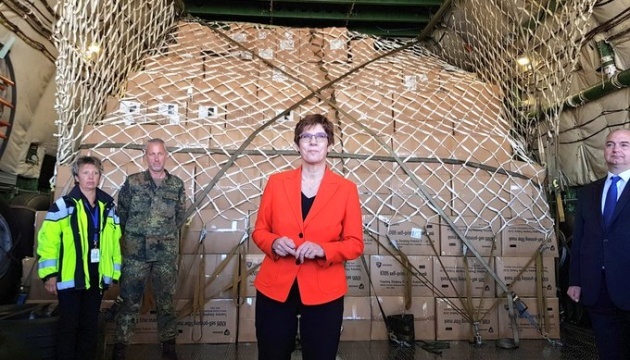 The An-225 Mriya arrived in Leipzig, Germany, early on April 27 with a medical cargo from China.

German Defense Minister Annegret Kramp-Karrenbauer met the world’s biggest aircraft at the airport, according to Ukrinform.

The German Defense Ministry coordinates the operation at the request of the Ministry of Health under the SALIS (Strategic Airlift Interim Solution) program.

She stressed that Ukrainian Antonov aircraft are now being used “to deliver what we need” to combat the coronavirus pandemic.

In addition to Germany, participants in the SALIS program also include NATO countries and partners such as Belgium, the Czech Republic, France, Hungary, Norway, Poland, Luxembourg, Greece, the United Kingdom, Slovakia, and Slovenia.

Running total of donations to the Salvation Army Ukraine fund for displaced Ukrainians : $ 780 !!