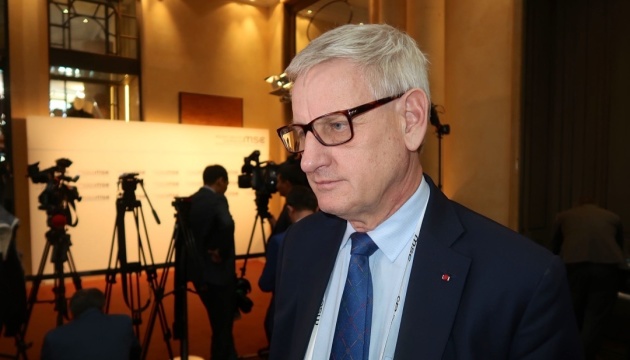 Bildt commented on a report that Ukraine’s State Bureau of Investigation opened criminal proceedings against Poroshenko regarding the signing of the Minsk agreements on the basis of a statement filed by Andriy Portnov, a former deputy head of the Presidential Administration under President Viktor Yanukovych.

He noted that President Zelensky was walking the same path as Yanukovych in the fight against political opponents.

“Yanukovych put Tymoshenko in prison on trumped-up charges, and now Zelensky seems to be aiming at doing the same. Shame!” the tweet reads.

The SBI opened criminal proceedings against Poroshenko on counts of possible treason committed by him when he signed the Minsk agreements in 2015. The proceedings were opened under Part 1 of Article 111 (high treason) of the Criminal Code of Ukraine.

The investigation was initiated at Portnov’s request.

Earlier, the SBI opened 13 criminal cases involving Poroshenko, most of them on the basis of statements filed by Portnov.