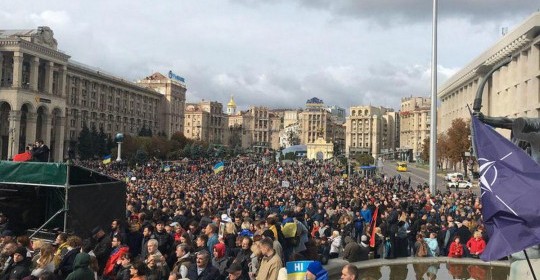 According to the preliminary information, about 10,000 people are taking part in the protest

The protest action against the Steinmeier formula is taking place at Maidan Nezalezhnosti Square in Kyiv, as Hromadske informs.

Earlier, Pavlo Klimkin, the ex-Minister of Ukraine’s Ministry of Foreign Affairs, urged to stop talkings about the adoption of the Steinmeier formula by Ukraine.

Steinmeier’s formula calls for elections to be held in the separatist-held territories under Ukrainian legislation and the supervision of the OSCE. If the OSCE judges the balloting to be free and fair, then a special self-governing status for the territories will be initiated and Ukraine will be returned control of its easternmost border.